Samar solon files resolution for recovery of Balangiga bells from US 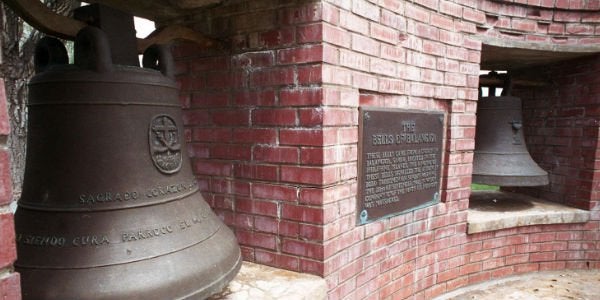 This May 2001 photo shows the two bells of Balangiga at the F.E. Warren Air Force Base outside Cheyenne, Wyoming, that signaled an attack by Filipino insurgents on occupying American troops in 1901. (AP FILE PHOTO)

MANILA — Just a few hours after President Duterte called on the United States to return the Balangiga bells taken in 1901, a Samarnon ally filed a resolution to direct the Department of Foreign Affairs to lead such efforts.

Eastern Samar Rep. Ben Evardone filed on Tuesday morning House Resolution No. 1142, “directing the government of the Republic of the Philippines… to take further steps and persevere in its diplomatic efforts to recover the three bells of Balangiga.”

The three bells were taken away from the church of the Eastern Samar town as war booty, after American forces massacred every male over 10 years old and burned down the village in retaliation for the killing of some 48 soldiers.

One of the bells is in Camp Red Cloud in Uijeongbu, South Korea, while the other two are at the F.E. Warren Air Force Base in Cheyenne, Wyoming.

In his resolution, Evardone stated that his constituents believe the bells “symbolize the heroism and commitment to freedom of our forefathers and ancestors who fiercely fought the abuses by the US
forces at the time.”

Returning the bells would “erase the last vestiges of the Philippine-American War, and thereby strengthen further the relations” between the Philippines and its former occupier.

Yet, Evardone’s resolution noted that two similar measures have been passed before in the 15th and 16th Congresses. Still, the bells remained at the hands of the United States.