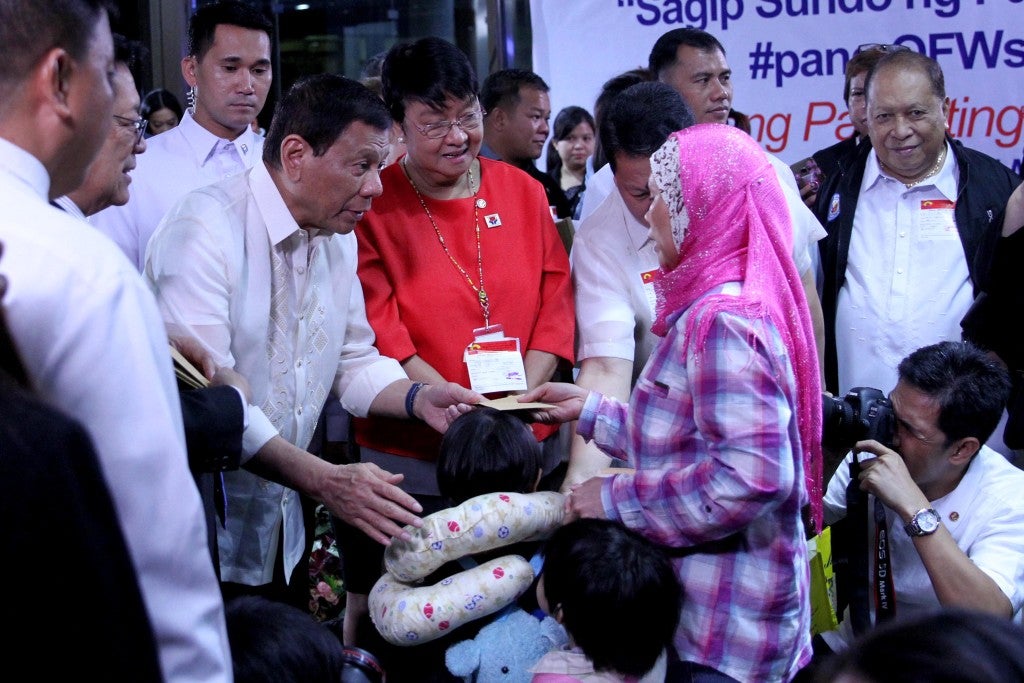 In this April 17, 2017 file photo, President Rodrigo Roa Duterte is assisted by Social Welfare and Development Secretary Judy Taguiwalo as he gives cash assistance worth P10,000 each to the 160 repatriated overseas Filipino Workers who were granted amnesty after they were found working illegally in the Kingdom Saudi Arabia. (Photo by Alfred Frias / Presidential Photographers Division)

MANILA — As Saudi Arabia’s amnesty program for illegally staying foreign workers ends on Monday (July 24), a migrant workers group has called on Malacañang and the Department of Labor and Employment to push through with plans to send chartered flights to fetch those who will be repatriated.

“The Duterte government [should] secure chartered flights, as had been done by other embassies and governments, to ensure that enough flights can ferry those who want to be repatriated,” Migrante International spokesman Arman Hernando said in a statement.

“Because the Duterte government has relied solely on flights provided for by the Saudi government, some OFWs have resorted to shelling out money to pay for their own air fare. Others remain stranded despite having completed their repatriation process, awaiting available flights,” he added.

Migrante claimed that since the Saudi government launched its amnesty campaign on March 29, only more than 6,000 OFWs have been repatriated by the Philippine government.

Hernando said this figure was short of the 15,000 who registered for the program, or those who the Philippine embassy deemed “qualified” for repatriation. These include OFWs who have overstayed their visa, OFWs with expired iqama, workers who have left their employers, and, workers who came in with a work permit but did not obtain their iqama within 90 days of arrival.

The amnesty, however, does not provide remedy for workers who have existing or pending labor complaints at the Saudi Ministry of Labor, such as non-payment of wages and other benefits.

“We have said before that while the Saudi amnesty program is a crucial opportunity for the Duterte government to process the repatriation of hundreds of thousands of stranded OFWs, we have also reiterated that it should play a more pro-active role and not be complacent and depend solely on the amnesty program,” Hernando sid.

“The number of repatriated OFWs shows a dismal effort on the part of the government. It is a far cry from the government’s own target, and definitely miniscule compared to the efforts of other governments.

Ethiopa, for one, has already repatriated at least 60,000 of its nationals since the amnesty program took place,” he added.

The organization asked that the government immediately process exit visas and provide air tickets at no cost to the stranded OFWs.

It also asked Philippine diplomatic posts to dispatch teams to far-flung provinces, labor camps and areas to assist OFWs who want to avail of the amnesty but have no means to do so.

Manila should also appeal for an extension of the amnesty program to cater to thousands more who have not been assisted by he government.

Hernando reminded the DOLE that issues of unpaid wages and labor violations have remained prevalent among OFWs since the Saudi crisis erupted in 2014-2015.

He said many OFWs have continued to await the resolution of their cases, at the prompting of the Duterte administration through the DOLE. He recalled that last year, when Labor Secretary Silvestre Bello visited Saudi Arabia, he encouraged OFWs to file labor complaints at the Saudi Labor Ministry.

Bello promised legal assistance to these OFWs, who signed special powers of attorney to allow the Philippine government officials to to represent them in their cases.

“Understandably, these OFWs would opt to stay instead of avail of the amnesty in anticipation of the wages that are due them. What is the Duterte government’s recourse for them? Sadly, OFWs who have been waiting for months, even years, for the resolution of their labor complaints may find the amnesty their only feasible solution and just opt to forfeit their claims. Again, what is the Duterte government’s plan for them?” Hernando said.

DOLE Undersecretary Dominador Say said last week that another 1,000 OFWs from Saudi Arabia have been scheduled to arrive in the following days.

He said OFWs who availed of the amnesty program have been given 60 days to leave the country. Those who did are likely to be apprehended after the deadline as Saudi authorities are expected to resume crackdowns on undocumented migrants.

“At this time, the government should not only be pro-active but preemptive. They should provide legal assistance and protection. Philippine posts should open their doors to stranded OFWs, to provide them sanctuary and prevent a repeat of the Tent City in 2013. Aside from an extension of the amnesty program, the Duterte government should demand a stop to the scheduled crackdowns in order to prevent a humanitarian crisis,” Hernando said.  SFM