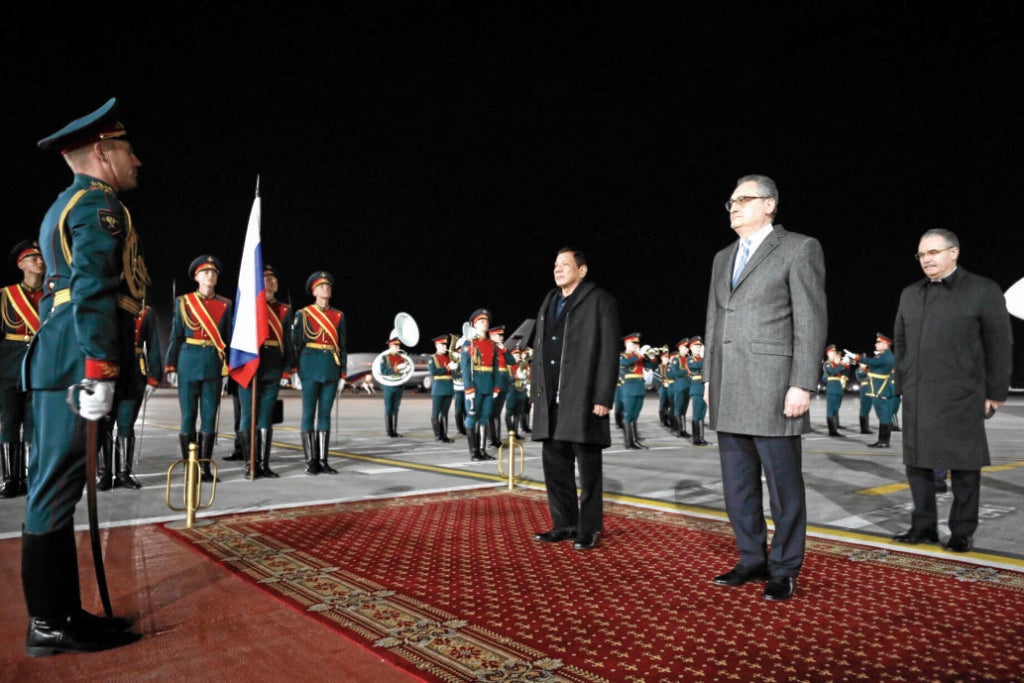 President Rodrigo Roa Duterte is accompanied by Deputy Foreign Minister Igor Vladimirovich Morgulov as he is accorded military honors upon his arrival at Vnukovo-2 Airport in Moscow for his official visit to the Russian Federation on May 23, 2016. PRESIDENTIAL PHOTO

President Duterte on Thursday defended his decision to bring a substantial delegation to Russia, including military and police officials.

Mr. Duterte said that the trip was not a junket like what former President Fidel Ramos said, as the Philippines got “9 billion of readymade transactions.”

Defense Secretary Delfin Lorenzana and National Security Adviser Hermogenes Esperon were also there because they had to discuss arms and trade, Mr. Duterte further said.

But he also admitted to inviting police and military officials who were set to retire, and that he asked them to bring their wives with them as a show of gratitude.

He said there had been no need to spend for their airfare because they hitched a ride in his chartered flight.

“You know, my payment for my plane, whether I am the lone passenger or I fill it with people, is the same,” he said in a speech in Davao City.

According to him, he just asked the retiring police and military officials to go to Russia with him to show his appreciation for them.

“I said, you come with me, because this is the only way I can show you this is also a nation who has the gratitude for you. Bring your wives and I’ll tour you around,” he said.

Mr. Duterte had barely spent a day in Moscow, though, before he had to cut short his trip because of the clashes that erupted between government troops and pro-Islamic State extremist groups.

Before leaving Russia, he put the whole of Mindanao under martial law for 60 days.