globalnation /
From Davao to Malacañang, and to the world 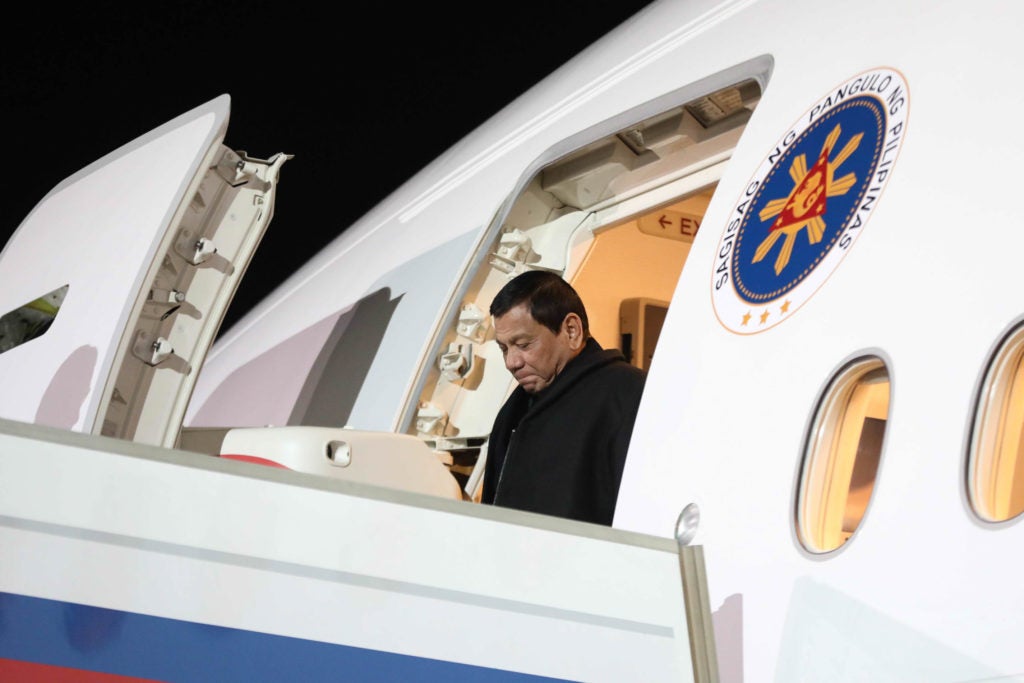 FILE— President Rodrigo Roa Duterte disembarks from the presidential plane upon his arrival at Vnukovo-2 Airport in Moscow for his official visit to the Russian Federation on May 23, 2017. PRESIDENTIAL PHOTO

In just a year, President Rodrigo Duterte, the first President from Mindanao, has made 21 foreign trips and, by Inquirer Research estimation, chalked over 77,542 miles, making him the most traveled President in his first year of office.

Before the 1986 Edsa People Power’s Revolution, President Diosdado Macapagal, who made four trips, had the most number of foreign trips by a President on his first year of office.

Mr. Duterte made his debut on the international stage during his September trip to Laos, where he attended the 28th-29th Association of Southeast Asian Nations (Asean) summits and accepted the country’s chairmanship of the Asean for 2017.

It could have been a very auspicious beginning if not for Mr. Duterte’s intemperate language in referring to US President Obama.

Mr. Duterte called Obama “son of a bitch” after he was told that the US president would raise human rights during their meeting at the sidelines of the Asean summit.

The White House announced soon after his comment was publicized that the meeting had been canceled.

Nonetheless, at his Asean  debut, the President met with the other Asean leaders and had a bilateral meeting with Japanese Prime Minister Shinzo Abe, who offered sympathy for the families of the victims of the Davao City explosion and told Mr. Duterte: “Mr. President, [you are] quite a famous figure also in Japan and I’m very excited to see you in person.”

In all, in his first year in office, Mr. Duterte had the remarkable feat of making seven state visits and attending four summits and leaders’ fora, where he met more than 20 heads of state and government.

Mr. Duterte also made stopovers in Thailand on Nov. 9 to pay his last respects to the late Thai King Bhumibol Adulyadej; and in Auckland, New Zealand on Nov. 22 to pay a courtesy call on the Minister of Foreign Affairs Murray McCully.

State visits are done at the invitation of the host country and are considered the highest form of diplomatic interaction between nations.

As such, they display the highest form of diplomatic ceremony: full arrival honors and a state luncheon or dinner to boot.

Upon arrival from his visits to Cambodia, China and Hong Kong last month, he said that the future of the Philippines was in the Asean and in Asia.

By then, he had already visited all Asean member-countries—a feat no other Philippine President before him had done, underscoring the importance he placed in improving and strengthening relations with our Asian neighbors.

Will the President travel more miles in his remaining years in office? Will he go the distance and visit Europe and the United States?

The issues of extrajudicial killings and human rights violations have been a thorn in the side of the Philippines’ relationship with the European Union and the United States.

Could health be another issue? A “bad headache” or migraine kept the President from Asean summit meetings with India and the United States in September 2016.

Last November, Mr. Duterte also missed the gala dinner for Apec leaders and the traditional photo session, sending a message to the Peruvian hosts that he was sick.

In sickness or in health, will there be more foreign trips to come?

No lockdown in Caloocan City amid rising COVID-19 cases

On path of redemption, Slaughter gives coach Jarencio reason to be excited