(Editor’s Note: Starting today, the Inquirer will run on its print, online and social media platforms a series of stories, reports and commentaries on the socioeconomic impact—positive and negative—that President Duterte has made in his first year in office. The articles will focus on how the former Davao City mayor has coped with the challenges of the presidency in five major areas that Filipinos consider most important in their lives: peace and order, traffic, economy, governance and foreign policy.  This evaluation of the administration’s achievements and shortcomings will take into account what Mr. Duterte had promised to do during last year’s presidential campaign, his June 30 inaugural speech and his July 25 State of the Nation Address.) It’s a tiring job, but someone’s got to do it.

On his first year in office, President Duterte embarked on 21 trips to 17 countries despite his repeated claims that he disliked traveling as it wore him out.

Trade Secretary Ramon Lopez, who described the President as “a reluctant globe-trotter,” said the trips were part of the chief executive’s job to build relations with his foreign counterparts.

The trips were productive visits whose benefits to the country far outweighed their costs to taxpayers, Palace officials said, citing some $36.8 billion in grants, loans, investment pledges and private business-to-business deals that the country gained as a windfall from these trips.

Malacañang has yet to account for the total cost of Mr. Duterte’s travels, but it released in February a breakdown of expenses for 12 of the President’s trips as of December 2016, which totaled P277 million.

The Inquirer has a pending freedom of information request on the cost of each of Mr. Duterte’s trips, starting from Laos in September 2016, to Russia in May this year, as well as the names of those included in his delegation for each trip. 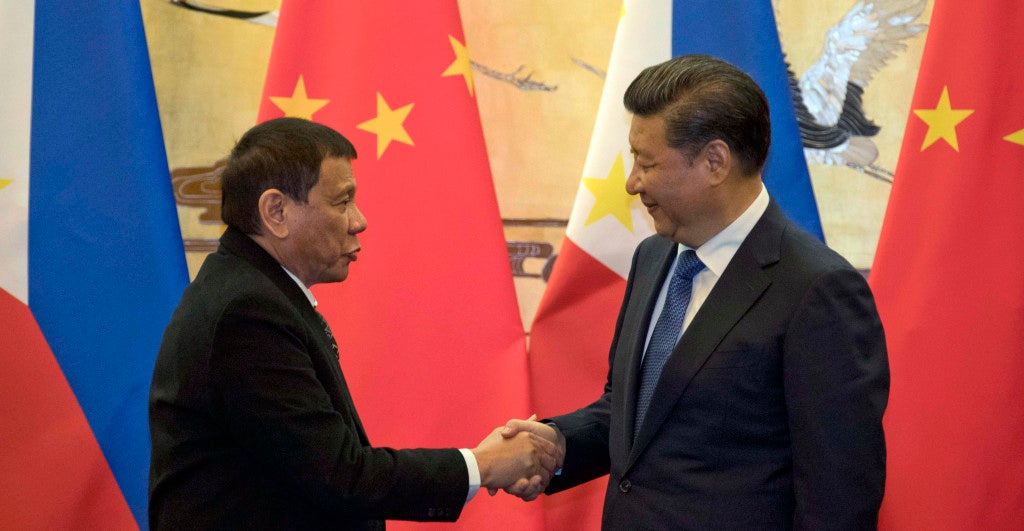 The President has been to the nine other members of the Association of Southeast Asian Nations (Asean): Laos, Indonesia, Vietnam, Brunei, Malaysia, Thailand, Myanmar, Cambodia and Singapore. He was in Thailand and Cambodia twice.

He also visited China twice and made a stop at its special administrative region of Hong Kong.  He traveled to Japan, Peru, Saudi Arabia, Qatar, Bahrain and Russia, and made a quick stop in New Zealand on his way home from Peru. 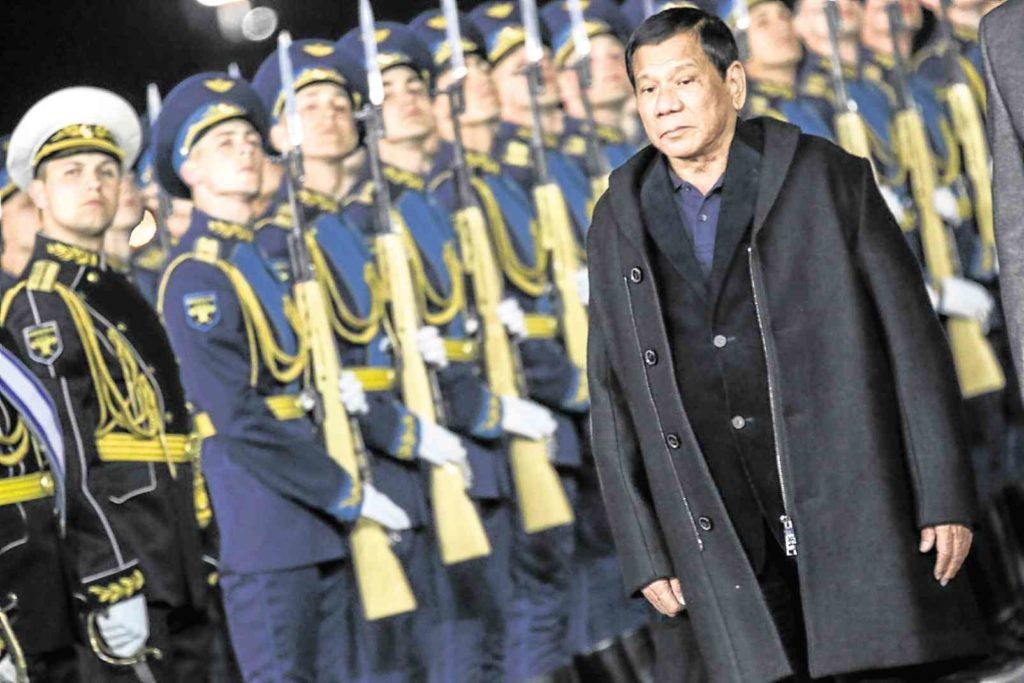 TROOPING THE LINE Military honors greets the President at Vnukovo-2 Airport in Moscow, Russia, on May 23, 2017. —MALACAÑANG PHOTO

The President and his delegation take chartered flights during trips overseas which, Malacañang said, were necessary.

“The President’s foreign trips form part of his obligation as head of state to maintain and strengthen the country’s diplomatic and economic ties with other nations,” Malacañang said in a statement.

His visits to Asean member-states are especially important because the Philippines chairs the regional bloc this year, the statement added.

“These trips have a long-term positive impact on the business sector.  So it’s petty if [people] raise those costs [as an issue],” Lopez told the Inquirer. 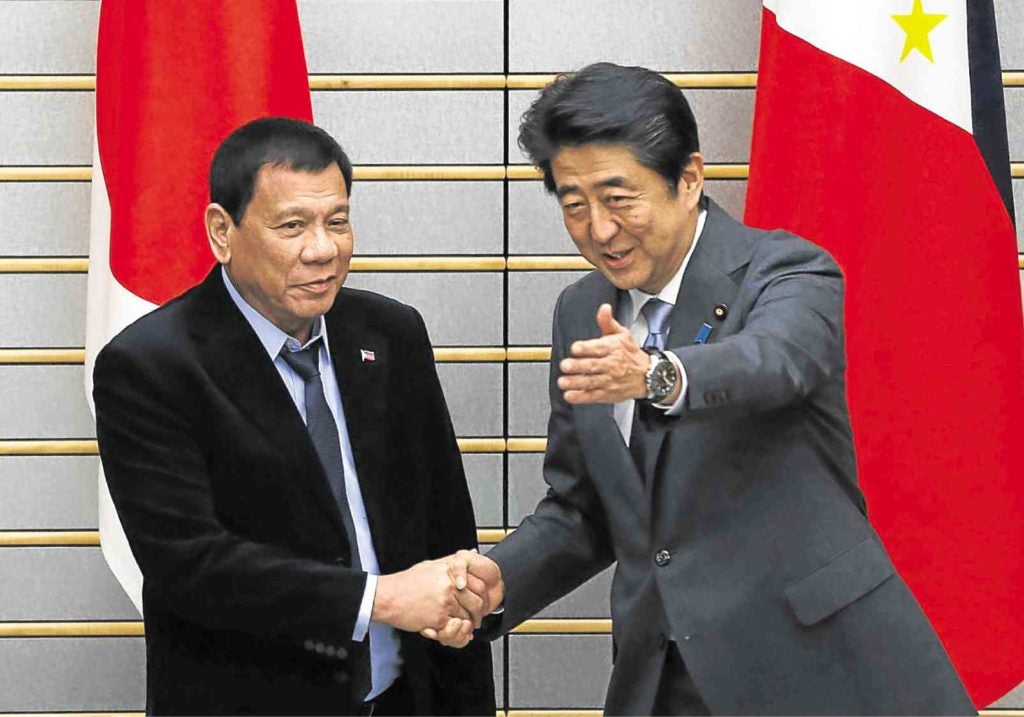 Lopez said that pledges and deals made during these trips were now being translated into action or concrete investments. The bulk of the financial deals, grants, loans, and pledges come from China and Japan.

“They’re all moving in different stages,” he said of the projects covered by the deals.

Some are in the feasibility study stage, while others are already in the implementation stage, Lopez said, adding that among the investments that have borne fruit is Mitsubishi Motors’ pledge to manufacture its Mirage car model in the Philippines.

Mr. Duterte himself unveiled the first Philippine-made Mirage in February, he said.

Also being implemented is an egg production facility, a project of ISE Foods of Japan in partnership with Jollibee Foods, the trade secretary said.

Many of the financial deals would not have been made or offered were it not for the President’s presence abroad, Lopez said, citing Mr. Duterte’s first state visit to China in October, which thawed frozen relations between the two countries.

The visit led to Beijing immediately lifting the ban on Philippine bananas and mangoes as a show of good faith, Lopez added.

Subsequently, Lopez said, Chinese firms ordered $1.7 billion worth of agriculture and nonagriculture products from the country.

Mr. Duterte’s trip to Japan last year similarly affirmed the closeness of the two countries’ leaders, and led to Prime Minister Shinzo Abe announcing a $9-billion aid package for the Philippines during his reciprocal visit to Manila. 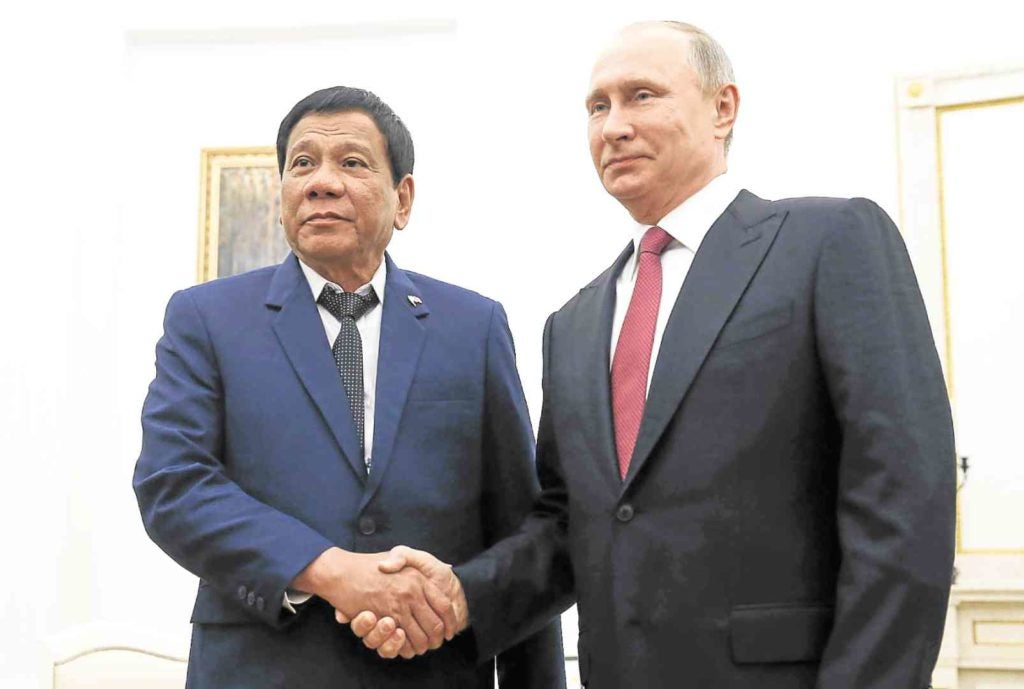 According to Lopez, the presence of the Philippines’ Chief Executive in a foreign country firms up rapport among the nations involved and builds trust and confidence.

This, in turn, expedites the signing of deals between private businesses as it sends the message that the agreements have the support of the Philippine government.

“The private sector is more motivated to sign because there is more trust,” Lopez said.

When he is overseas, Mr. Duterte also serves as the country’s chief economic ambassador, the trade official said, adding that the President himself  usually encourages  investors and businesses abroad to buy more Philippine products and come visit the country.

This helps balance the perception about the Philippines among foreigners who may have formed an opinion about the country based on what they have read from foreign media, Lopez said, referring to critical stories about the administration’s bloody war on drugs.

The foreign trips also result in agreements in other areas that strengthen the nation’s ties with other countries and open the door for more cooperation in the future, he added.

“We feel that the trips get a lot of mileage,” Lopez said.

The trade official shrugged off questions about the large delegation and the number of nonofficials who joined the President’s party during his trips abroad. “It projects an image that this is a solid government,” Lopez said.

The President’s large delegation in his foreign trips came under scrutiny after the country’s top security officials joined him in Moscow and were unable to respond immediately when fighting between government forces and pro-Islamic State militants erupted in Marawi in May.

The incident led to Mr. Duterte cutting short his state visit to Russia and placing Mindanao under martial law.

Former President Fidel Ramos said some officials turned the trip into a “junket,” but Malacanang said it was important for key members of the administration to be with the Chief Executive for the Moscow visit.

Every time he goes out of the Philippines, the country’s welfare is on top of the President’s mind, Malacañang said.

“At 72, the President has subjected himself to a grueling schedule of foreign travels in his desire to advance the national interest in the global community of nations,” Malacañang added.