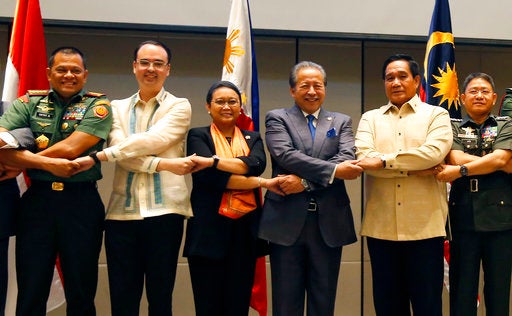 The Philippines, Indonesia and Malaysia plan to closely cooperate to halt the flow of militants, weapons, funds and extremist propaganda across their borders as they expressed alarm over recent attacks in their region.

Philippine Foreign Secretary Alan Peter Cayetano and his Indonesian and Malaysian counterparts gathered in Manila with top security officials Thursday to discuss a joint plan of action amid a disastrous siege of southern Marawi city by militants aligned with the Islamic State group that has left about 369 combatants and civilians dead.

As the IS loses territory in Syria and Iraq, Southeast Asian governments worry that battle-hardened Asian fighters, including those from Indonesia and Malaysia, may return to exploit social restiveness, weak law enforcement, a surfeit of illegal arms and raging insurgencies to establish a foothold.

Many worry that the monthlong siege in Marawi could draw in the returning jihadis.

“We expect that those who will be displaced there will go to Asia and because of the Marawi uprising, the Philippines is like a magnet,” said Philippine military chief of staff Gen. Eduardo Ano, who took part in the closed-door security conference.

Indonesian Foreign Minister Retno Marsudi condemned the attack in Marawi and said her government was ready to help.

A draft of a joint statement to be released after the meeting, a copy of which was obtained by The Associated Press, expressed “concern over the recent incidents of terrorism and violent extremism in their countries” and their desire to plot joint strategies to combat it.

They pledged to enhance intelligence-sharing on potential and imminent threats, stop the flow of militants, funds and weapons and contain the spread of propaganda on social media.

The neighboring countries will also discuss how to cooperate in enhancing military and law enforcement training, compare their counterterrorism laws and help each other “counter the extremist narrative through education” and promotion of religious tolerance and moderation, according to the draft statement.

“What is important is the help of religious leaders so we can bring them back to moderate, mainstream Islam,” Ano said, adding that militants frame their struggle as “Armageddon, like a fight between Crusaders and Islam warriors.”

On May 23, about 500 militants, including about 40 Indonesian, Malaysian and other foreigners, stormed the business district of Marawi, a lakeside center of the Islamic faith in the largely Roman Catholic country’s south, taking a Roman Catholic priest and other hostages, occupying buildings and installing IS-style black flags.

Of the 276 militants who have been killed, at least three were Malaysians and one came from Indonesia, Ano said, adding that the arrest in Malaysia last week of an unspecified number of militants who were suspected to be bound for Marawi showcases the crossborder cooperation needed to secure the region.