Governments urged to be careful on travel warnings 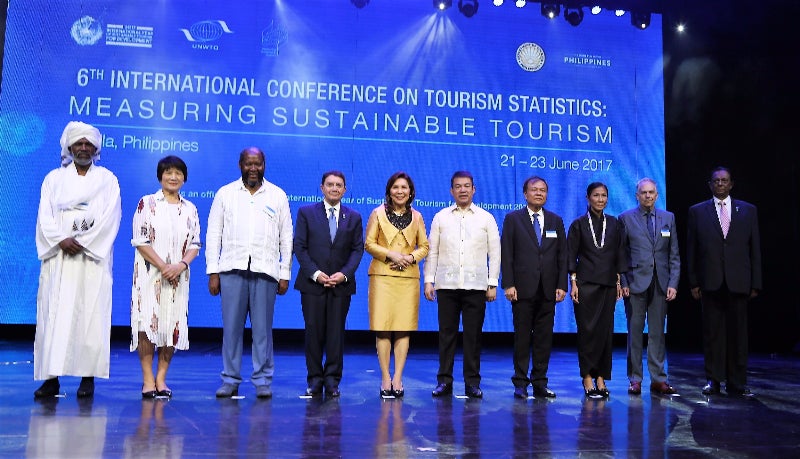 Tourism ministers from different countries, including Philippines’ Tourism Secretary Wanda Corazon Teo (center), take part in the International Conference on Tourism Statistics at the Marriot Hotel in Pasay City, on June 21, 2017. The conference is spearheaded by the UN World Tourism Organization. Aside from the Philippines, Thailand, Cameroon, Costa Rica, Fiji, Bangladesh, Sri Lanka, and Seychelles also participated in the conference.

MANILA — A senior official of the United Nations World Tourism Organization has called on governments to be more circumspect in issuing travel advisories for their citizens who plan to visit or are already in countries where terror attacks and other violent incidents happen to take place.

“Many, many countries suffer from travel advisories and UNWTO has a very clear position in that regard. Countries that issue travel advisories, of course they are considering the safety of their citizens, it’s their obligation. But they have also to consider travel advisories’ geo-reference dates so they should not throw a blanket over the whole country but to be very clear where the problems are,” Marcio Favilla, the organization’s executive director for operation programs and institutional relations said in a press conference on Wednesday (June 21).

According to Favilla, the UNWTO also frowns on travel advisories that have no time limit, adding that the countries that are subject of the advisories should also be given the opportunity to suggest revisions.

“The travel advisories should be time-bound and not issued one day and be there forever. They should clearly indicate when it was issued and for how long. And third, the countries affected should be consulted about them. And that consultation would eventually lead to a more precise, more correct travel advisory. If countries follow these we will have a much  better situation on that regard,” he said.

Xu Jin, UNWTO regional director for Asia and the Pacific, suggested that countries affected by travel advisories such as the Philippines could compensate by intensifying promotion efforts in “strong source
markets” such as South Korea, Japan and China.

He said “perception issues” generated by travel advisories could be addressed by participation in regional travel fairs and promotional campaigns where potential travelers’ concerns could be directly addressed.

In April, the United States, Canada, United Kingdom, Australia, France, and New Zealand issued separate travel advisories advising their citizens not to travel to Central Visayas because of the serious threat of kidnappings by terror groups.

The following month, the US, Canada, and Australia issued a second travel advisory advising their citizens against traveling to Palawan because of potential terrorist activities.

After the Marawi City siege and the robbery-arson incident at Resorts World, more countries also issued travel advisories on the Philippines.

Favilla and Xu are among the UNWTO officials attending the International Conference on Tourism Statistics held at Marriott Hotel in Pasay City. The three-day event is being hosted by the Department of Tourism.

According to Favilla, the holding of the conference in the Philippines sends a “political message” from the UNWTO members that they are confident that the country is a safe place to travel to.

In his opening remarks, UNWTO Secretary-General Taleb Rifai, said all the world’s people must go visit the Philippines at one time or another.

“You haven’t lived if you have not experienced the Philippines. We are here, ladies and gentlemen, to tell the world to come to the Philippines and make no mistake about it. Anybody who tries to present any other version of the story should come and see with your own eyes. All of the countries of the world that have experienced difficulties have come back and have shown their best and their beauty comes out,” Rifai said.

Rifai described the event as a “homecoming” and a milestone since Manila last hosted a conference of the organization in 1980.

“The world is lucky to have the Philippines. Culture, nature, upbeat people give the country so much life. The Philippines is a country to travel and respect, and its greatest gift is its people,” Rifai added.

President Duterte, in a statement read by Tourism Secretary Wanda Corazon Teo, thanked the UNWTO for choosing the Philippines as the venue for the conference.

“More than just a proof that the Philippines remains a safe destination for meetings, conferences, and other tourism activities, it also affirms the Philippines’ effort to promote tourism as a vehicle for a nation’s sustainability and inclusive progress,” the President’s statement read.

The three-day gathering focuses on measuring sustainable tourism. Tourism ministers and chief government statisticians are expected to develop a framework and uniform rules in collecting and monitoring tourism data to ensure sustainability.  SFM/rga