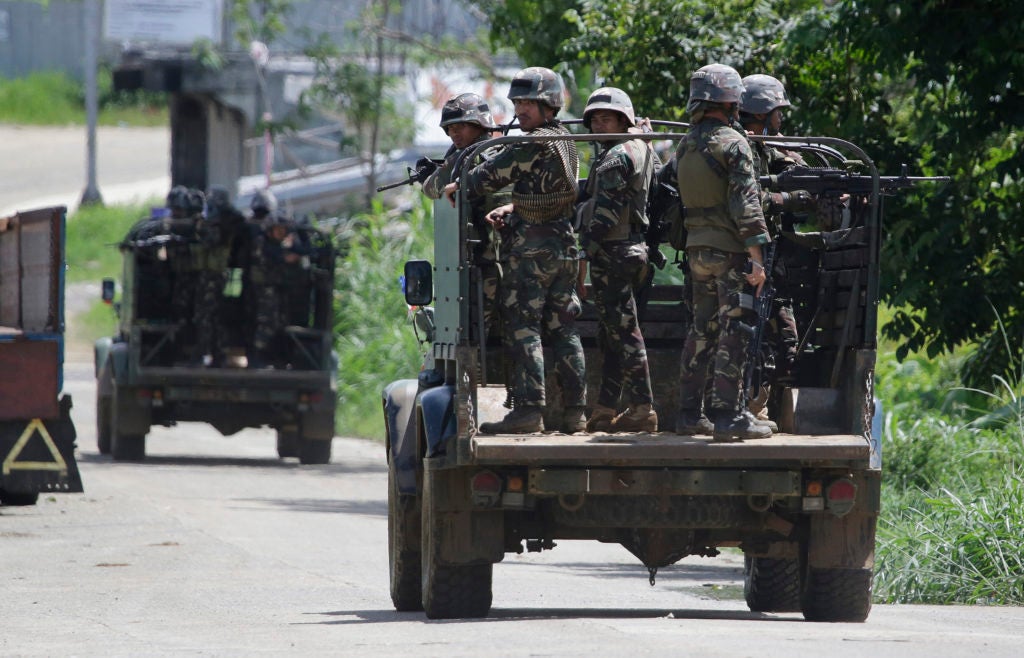 WASHINGTON — Southeast Asia’s jihadis who fought by the hundreds for the Islamic State group in Iraq and Syria now have a different battle closer to home in the southern Philippines. It’s a scenario raising significant alarm in Washington.

The recent assault by IS-aligned fighters in Marawi City has left more than 300 people dead, exposing the shortcomings of local security forces and the extremist group’s spreading reach in a region where counterterrorism gains are coming undone.

US Defense Secretary Jim Mattis told Congress last week that a long-running US military operation to help Philippine forces contain extremist fighters was canceled prematurely three years ago. Small numbers of US special forces remain in an “advise and assist” role, and the US is providing aerial surveillance to help the Philippines retake Marawi, an inland city of more than 200,000 people.

But lawmakers, including from President Donald Trump’s Republican Party, want a bigger US role, short of boots on the ground. They fear the area is becoming a new hub for Islamist fighters from Southeast Asia and beyond.

“I don’t know that ISIS are directing operations there but they are certainly trying to get fighters into that region,” said Republican Sen. Joni Ernst of Iowa, using another acronym for the group. “We need to address the situation. It should not get out of control.”

US intelligence and counterterrorism officials note that IS has publicly accepted pledges from various groups in the Philippines. In a June 2016 video, it called on followers in Southeast Asia to go to the Philippines if they cannot reach Syria.

About 40 foreigners, mostly from neighboring Indonesia and Malaysia, have been among 500 involved in fighting in Marawi, the Philippine military says. Reports indicate at least one Saudi, a Chechen and a Yemeni were killed. In all, more than 200 militants have died in the standoff, now in its fourth week.

Video obtained by The Associated Press from the Philippine military indicates an alliance of local Muslim fighters, aligned with IS, is coordinating complex attacks. They include the Islamic State’s purported leader in Southeast Asia: Isnilon Hapilon, a Filipino on Washington’s list of most-wanted terrorists, with a $5 million bounty on his head.

US officials are assessing whether any of the estimated 1,000 Southeast Asians who traveled to Iraq and Syria in recent years are fighting in Catholic-majority Philippines. They fear ungoverned areas in the mostly Muslim region around Marawi could make the area a terror hub, as in the 1990s.

Then, the Philippines was a base of operations for al-Qaeda leaders like Khalid Sheikh Mohammed and Ramzi Yousef, who plotted in 1994-95 to blow up airliners over the Pacific. The plot was foiled. But the same men were instrumental in the 9/11 attacks on the United States.

Other nations share the fear. Singapore recently warned of IS exerting a radicalizing influence “well beyond” what al-Qaeda and Jemaah Islamiyah ever mustered. Jemaah Islamiyah carried out major terror attacks around the region in the 2000s. IS already has been linked to attacks in Indonesia and Malaysia, and foiled plots in Singapore, this past year.

This month, Mattis told the region’s defense chiefs that “together we must act now to prevent this threat from growing.” In Congress this past week, he stressed intelligence sharing and nations like Singapore sharing the burden, rather than deploying U.S. troops.

More than 500 US special forces were based in the Mindanao region from 2002 to 2014, advising and training Filipino forces against the Abu Sayyaf, a group notorious for bombings and kidnappings. When it ended, Philippine and US officials voiced concern the U.S. withdrawal “could lead to a resurgence of a renewed terrorist threat,” the RAND Corp. later reported. Months before the withdrawal, Abu Sayyaf pledged support to IS.

Supporting the Philippines isn’t straightforward in Washington. President Rodrigo Duterte is accused of overlooking and even condoning indiscriminate killings by his forces in a war on drugs. Thousands have died. But that campaign has involved mainly police and anti-narcotic forces, not the military leading the anti-IS fight.

Still, the Philippine government is partly to blame for Marawi’s violence, said Zachary Abuza, a Southeast Asia expert at the National War College. He said the root cause was the government’s failure to fulfill a 2014 peace agreement with the nation’s largest Muslim insurgency, which fueled recruitment for IS-inspired groups.

Ernst, who chairs a Senate panel on emerging threats, wants the U.S. military to restart a higher-profile, “named operation” helping the Philippines counter IS. The Pentagon retains between 50 and 100 special forces in the region. At the request of the Philippine military, it has deployed a P3 Orion plane to surveil Marawi. It gave more than 600 assault firearms to Filipino counterterrorism forces last week.

Duterte has retreated from threats to expel U.S. forces from the Philippines as he seeks better ties with China. He said recently he hadn’t sought more US help, but was thankful for what he was getting.

“They’re there to save lives,” Duterte said.