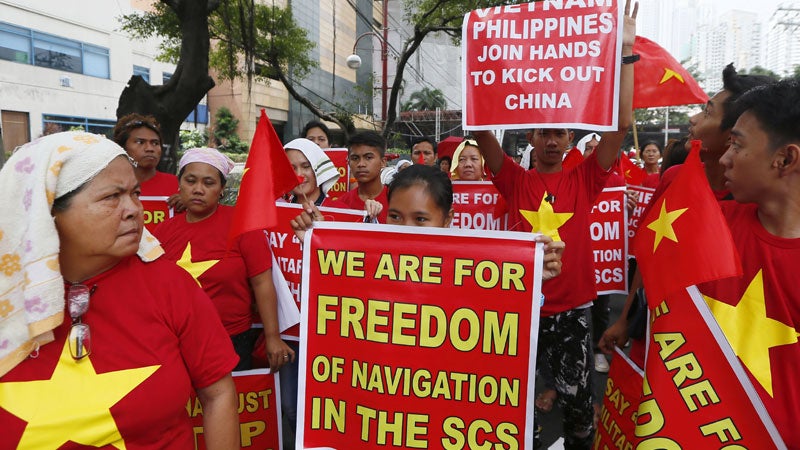 Filipinos, together with Vietnamese expatriates, display placards during a rally at the Chinese Consulate to protest China’s island-building and deployment of surface-to-air missile system at the disputed Paracel Islands off South China Sea, Thursday, Feb. 25, 2016 in the financial district of Makati city, east of Manila, Philippines. The protesters, who were also joined by students from the ASEAN countries, are urging the international community to join unified efforts in calling for peace, stability and development in the ASEAN region. (AP Photo/Bullit Marquez)

Vietnamese Foreign Ministry spokeswoman Le Thi Thu Hang told reporters that her government has legal basis and historical evidence to affirm its sovereignty over the Spratly and Paracel islands in the South China Sea and that acts by foreign countries on the islands without Vietnam’s permission were illegal.

Vietnam, along with China and the Philippines, Malaysia, Brunei and Taiwan claims parts of or all the Spratly islands, which are believed to sit on rich natural resources and occupy one of the world’s busiest sea lanes.