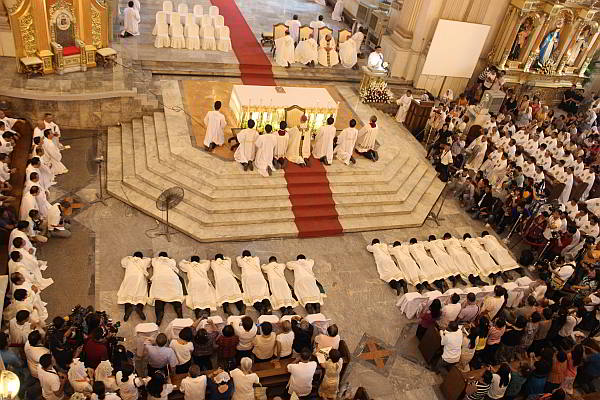 At 1 p.m. last Thursday, Pope Francis invited everyone to dedicate a minute daily to reflect and pray according to one’s own religious tradition, and to commit to peace around the world.

The worldwide minute of prayer marks the second anniversary when Pope Francis together with Israeli President Shimon Peres and Palestinian leader Abu Mazen prayed together for peace in the Middle East.

The event carries extra significance this year in the Philippines, particularly in Marawi City, which has been in the grip of a raging battle between Philippine government forces and the Maute and the Abu Sayyaf terrorist groups.

Msgr. Joseph Tan, media liaison officer of the Archdiocese of Cebu, echoed the Church’s appeal to storm heaven with prayers and to end all forms of violence in the country and other parts of the world.

“We need something not solely based on human efforts but from above. The real gift of peace comes from the Father. We pray for redress of wrongs and the end of violence especially involving the marginalized sectors of society,” he said in an interview.

“Peace is not only legal, political, or military but also spiritual. In whatever way we can, let us pray for peace,” he added.

He asked Catholics to pray the Rosary, the Chaplet of the Divine Mercy, and or pause for silent prayer.

Last May 23, President Duterte declared martial law in Mindanao for 60 days as clashes erupted between government soldiers and the Maute terror group in Marawi City, Lanao del Sur.  The battles started when law enforcers tried to arrest Abu Sayyaf leader Isnilon Hapilon, who has allegedly been appointed the ISIS leader in the Philippines with the Maute Group as the main ISIS affiliate here.

Duterte said he might impose martial law too in the Visayas and Luzon to stop terrorists from sowing violence in other parts of the country.

The Islamic State-inspired Maute militants who have pledged allegiance to the Islamic State in Iraq and Syria (ISIS) took over parts of Marawi, burned buildings, and took as hostage a Catholic priest and
several other persons.

The siege dragged on and triggered mass evacuation and destruction of a number of establishments.

Although no martial law is declared yet in Cebu, random checkpoints have already been conducted in strategic locations to avert terror attacks.  SFM