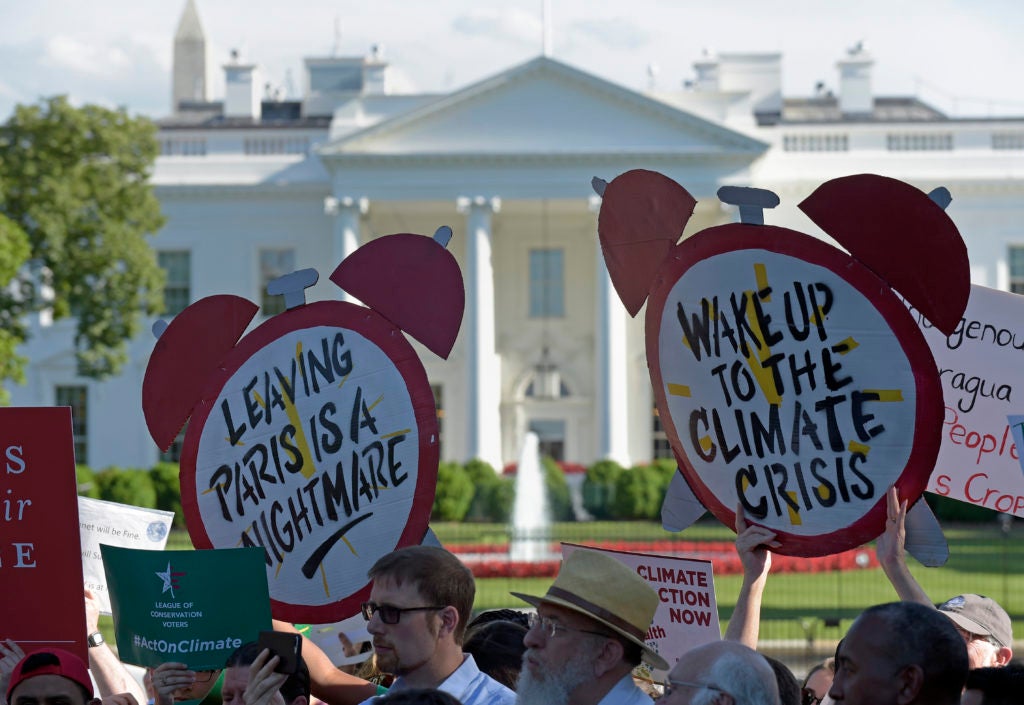 Protesters gather outside the White House in Washington, Thursday, June 1, 2017, to protest President Donald Trump’s decision to withdraw the Unites States from the Paris climate change accord. (AP Photo/Susan Walsh)

The Philippine government on Friday expressed disappointment in US President Trump’s decision to withdraw from the Paris Agreement, which seeks to reduce greenhouse gas emissions and address climate change.

“The Philippines is deeply troubled by the decision of the US to withdraw from the Paris Agreement and appeals that they reconsider their position,” the Climate Change Commission (CCC) said in a statement.

“The US, as the 2nd largest emitter of greenhouse gases, and more importantly, one of the world leaders, would have played a key role in creating the much needed global paradigm shift towards a more climate-resilient and climate-smart future,” it said.

The CCC pointed out that the Philippines, which is among the countries most vulnerable to climate change, is affirming its commitment to the Paris pact.

“We recognize the need for all countries to work together to address the increases in global temperature, which have resulted and will continue to result in more intense and frequent typhoons and droughts for the Philippines, threatening the security of our people, the food and water needed to sustain them, and their livelihoods,” it said.

In a speech, Trump said the US will stop implementing the “bad” deal and would instead try to renegotiate it. He said he cannot support a deal that “punishes” the United States. He believes that the agreement also went easy on India, China and Europe and did not “put America first.”

Local policy group Institute for Climate and Sustainable Cities (ICSC) also criticized Trump’s decision, which it said “promoted fossil fuel interests over those of the people and the planet.”

“The Philippine government must join the overwhelming majority of the international community not only in defending its people from the threats of climate change, but also in grabbing the opportunities brought about by low-carbon development,” said ICSC policy coordinator Denise Fontanilla.

ADVERTISEMENT
Read Next
Embassies warn nationals in PH after Resorts World Manila attack
EDITORS' PICK
DILG to stranded workers: ‘Stay where you are’ until Luzon-wide quarantine is over
BREAKING: 1,075 people in PH has coronavirus disease – DOH
Style and music journeys with Claudia Barretto
UP-PGH wards for COVID-19 patients finished in 5 days
IATF: Food firms to operate with 50% of workforce during Luzon quarantine
Cebu City closes its borders
MOST READ
Tootsy Angara bares neighbor wanted them out of village
Pacquiao to seek probe on leaked private letter from Barangay Dasmariñas
Another doctor dies due to COVID-19 in Cebu City, doctor-husband critical
Lagman: Ban overseas deployment of Filipino medics, nurses for now
Don't miss out on the latest news and information.