Is martial law the right response to the ISIS threat? 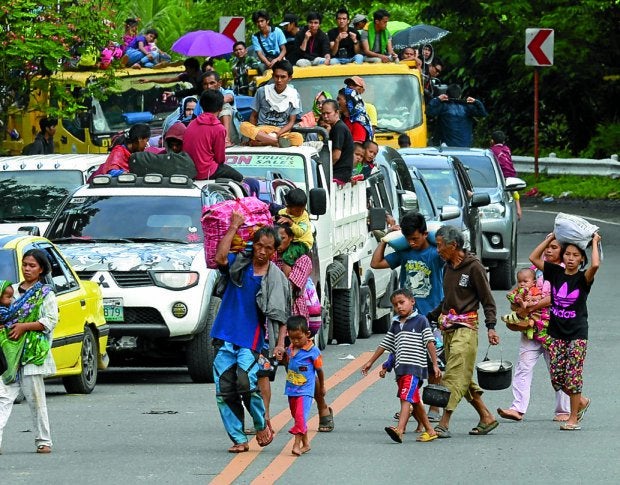 Never since the early years of Marcos’ martial law in the 1970s has Marawi City, the capital of Lanao del Sur province, experienced such bloody fighting as over the past week between government troops and ISIS-linked extremist groups – the Maute Group and Abu Sayyaf. The fighting was triggered by a botched military operation to capture Abu Sayyaf leader Isnilon Hapilon, one of the world’s most wanted terrorists and reportedly the designated “emir” of ISIS in the Philippines. As of Sunday, the sixth day of fighting, 95 people had been killed – 61 terrorists, 15 government forces and 19 civilians.

Announcing that “ISIS is already here” and claiming that foreign jihadists had joined Maute and Abu Sayyaf extremists in the gun battles in Marawi, President Rodrigo Duterte has declared martial law in the entire island of Mindanao. The Philippine Constitution requires Congress to approve Duterte’s martial law imposition, limits martial rule to 60 days, and allows the Supreme Court to rule on its legality. Duterte has stated, however, that he is prepared to defy the Supreme Court and Congress on the matter.

Human rights and civil liberties advocates and victims of Marcos’ dictatorial rule have denounced Duterte’s move, warning that this is just a prelude to the imposition of a Duterte dictatorship over the entire country. With the rise of the Maute Group and other ISIS-linked terrorist groups and with Abu Sayyaf’s alignment with ISIS, is the declaration of martial law in Mindanao truly warranted? Or is it just a pretext for another agenda?

The emergence of extremist groups in Mindanao has usually come about during periods of breakdown of the peace process – the Abu Sayyaf, a few years after the failure of the Jeddah Accord of 1987; the Bangsamoro Islamic Freedom Fighters (BIFF), after the collapse of the Memorandum of Agreement on Ancestral Domain (MOA-AD) in 2008; and now the Maute Group, after the non-passage of the Bangsamoro Basic Law (BBL) for the implementation of the Comprehensive Agreement on the Bangsamoro (CAB) of 2014.  The rise of the Abu Sayyaf, BIFF and the Maute Group is mainly the result of the repeated failures of the Philippine government – from Marcos to Duterte – to forge and judiciously implement a just and durable peace agreement with the MNLF and the MILF.

Soon after the non-passage of BBL, this writer already warned: “The danger lies more with jihadist groups or possible breakaways from MNLF/MILF taking advantage of the BBL/CAB collapse. In a video released by ISIS’ official newsletter, Al-Naba, early this year [2016], the fearsome terrorist organization claimed that four groups of Filipino jihadists had merged under the leadership of ASG ideologue Isnilon Hapilon, and pledged allegiance to ISIS leader Abu Bakr al-Baghdadi. The ISIS seems to be girding to establish a wilayat – a province under its caliphate – in Southeast Asia, which would then allow the latter to obtain financial and other support from ISIS.” (See “Mindanao: Nationalism, Jihadism and Frustrated Peace,” Journal of Asian Security and International Affairs, April 2016.)

Just before the BCF meeting in Jeddah, Duterte was quoted as saying that because of factionalism among the Moro rebel groups, he was “a bit pessimistic now” about the Bangsamoro peace process and “a little bit worried that nothing will come out of this.”

The Maute Group, the Abu Sayyaf and other pro-ISIS extremist groups have intensified their terrorist activities and recruitment. They have been tagged as having perpetrated the September 15, 2016 bombing in Davao City that claimed the lives of 15 people and Christmas Eve bombing in Midsayap, North Cotabato, that injured 13 people.

Over the past few years, ISIS-inspired groups have been trying to open a major fighting front in Southeast Asia. With its history of long unresolved armed conflict and with large areas outside of government control, Mindanao is looming as the new ISIS front. Pointing to the repeated failures of past peace pacts, the ISIS-linked groups have been hammering on the irreconcilability of Christian and Muslim differences.

To bolster their argument, they may well be trying to exploit recent developments: the post-Mamasapano anti-Muslim hysteria, the non-passage of BBL and the current impasse in the Mindanao peace process. The ISIS-linked groups want to turn Samuel P. Huntington’s much ballyhooed “clash of civilizations” into a reality in Mindanao.

Martial law is the wrong approach to the ISIS threat. It is like jumping from the frying pan to the fire. It is precisely what the ISIS-linked groups have wanted to happen. With Mindanao in the spotlight, they can now show to jihadists all over the world that they have succeeded in opening a major fighting front in Southeast Asia. They can now mobilize greater financial and material support from ISIS and other terrorist groups worldwide. They can now attract more jihadists from all over to join them. They may even realize their dream of being declared a wilayat of the ISIS caliphate in Southeast Asia.

No budget for agreement

While the government has been spending millions of pesos on military operations against ISIS-linked terrorist groups, the Bangsamoro Transition Council (BTC), which is crafting a draft basic law (in place of the BBL) for the Comprehensive Agreement on the Bangsamoro, still does not have a budget up to now and its employees have not been paid their salaries.

As the experience with Marcos’ martial law has shown, civilian oversight over the military’s operations tends to weaken during martial law, resulting in grave human rights abuses. In Moro areas, military operations under Duterte’s martial law run a greater risk of inadvertent clashes between government forces and MILF/MNLF fighters. Duterte’s recent order to government troops – “all people who are not authorized by government to carry arms and they resist, kill them, wipe them out” – is most worrisome. It is a well-known fact that many Moros keep their own guns for self-defense and these arms are usually not registered.