Chelsea Clinton, a former broadcaster and daughter of Hillary and Bill Clinton, called President Rodrigo Duterte a “murderous thug without regard for human rights” after criticizing the Filipino Chief Executive for joking about soldiers committing rapes in Mindanao while the region is under martial law.

“Duterte is a murderous thug with no regard for human rights. It’s important to keep pointing that out (and) that rape is never a joke,” Chelsea said, reacting to a news report on Duterte’s statement, over her Twitter account on Saturday (Manila time).

In an earlier tweet, Chelsea retweeted the news report about Duterte’s joke and captioned it with: “Not funny. Ever.”

Speaking before soldiers in Iligan City on Friday, Duterte assured the troops that he will be responsible for the consequences and ramifications of martial law, even if it includes rape by bad military forces.

“Trabaho lang kayo. Ako na bahala. Ako na magpakulong sa inyo. Kapag naka-rape ka ng tatlo, aminin ko na akin ‘yun. ‘Pag nag-asawa ka ng pang-apat, bugbugin ka I will go to jail for you. (Just work. I will support you. I will go to jail for you. If you happen to have raped three women, I will own up to it. If you marry four, son of a bitch, you will get beaten)” Duterte said. 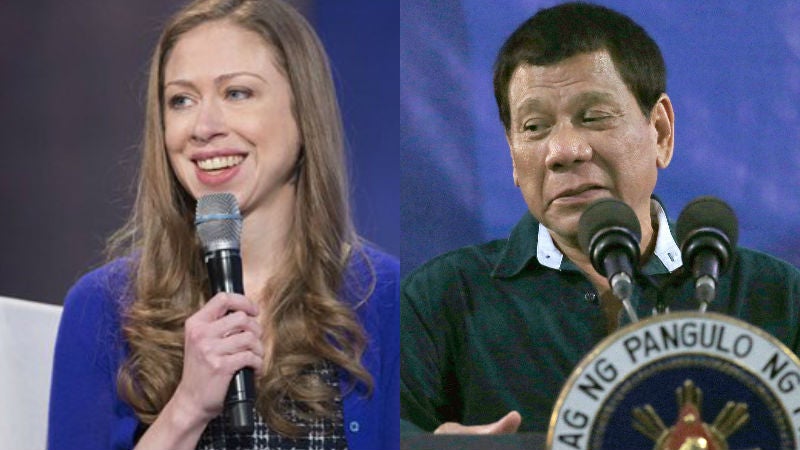 The former Davao mayor declared martial rule in the whole of Mindanao after an intense firefight between government forces and members of the terror Maute group in Marawi City.

What triggered the clash was the government forces’ attempt to capture Abu Sayyaf leader Isnilon Hapilon, who was said to be the leader of Islamic State in the Philippines. IDL