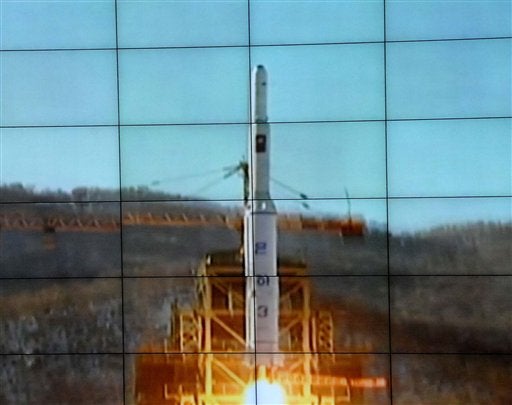 In this monitor screen image taken by the Korean Central News Agency and distributed in Tokyo by the Korea News Service, the Unha-3 rocket lifts off from a launch site on the west coast, in the village of Tongchang-ri, North Korea, Wednesday, Dec. 12, 2012. The Philippines on Thursday, May 18, 2017, expressed very grave concern over Pyongyang’s latest missile launch four days earlier. AP

The Department of Foreign Affairs condemned on Thursday another missile launch from the Democratic People’s Republic of Korea (DPRK).

“The Philippines expresses very grave concern on the DPRK’s latest missile launch on 14 May 2017,” DFA said in a statement.

The missile flew across North Korea and into the Sea of Japan.

“The Philippines continues to call on DPRK to cease these acts of provocation, a clear breach of the UN Security Council resolutions, and constitutes a serious challenge to regional peace and stability in the Korean Peninsula and the international community,” it said.

The government also reminded North Korea to “comply with its international obligations under relevant UNSC resolutions and to return to the process of constructive dialogue.”

Analysts said the launch is the country’s most successful yet. Pyongyang claimed that it now has a rocket capable of sending a large nuclear warhead. It also alleged that the United States is within range of its missiles.

North Korea has been attempting to build its own intercontinental ballistic missile (ICBM), some say as a nuclear deterrent. CBB/rga