Give diplomacy a chance, says PH envoy ahead of sea talks with China 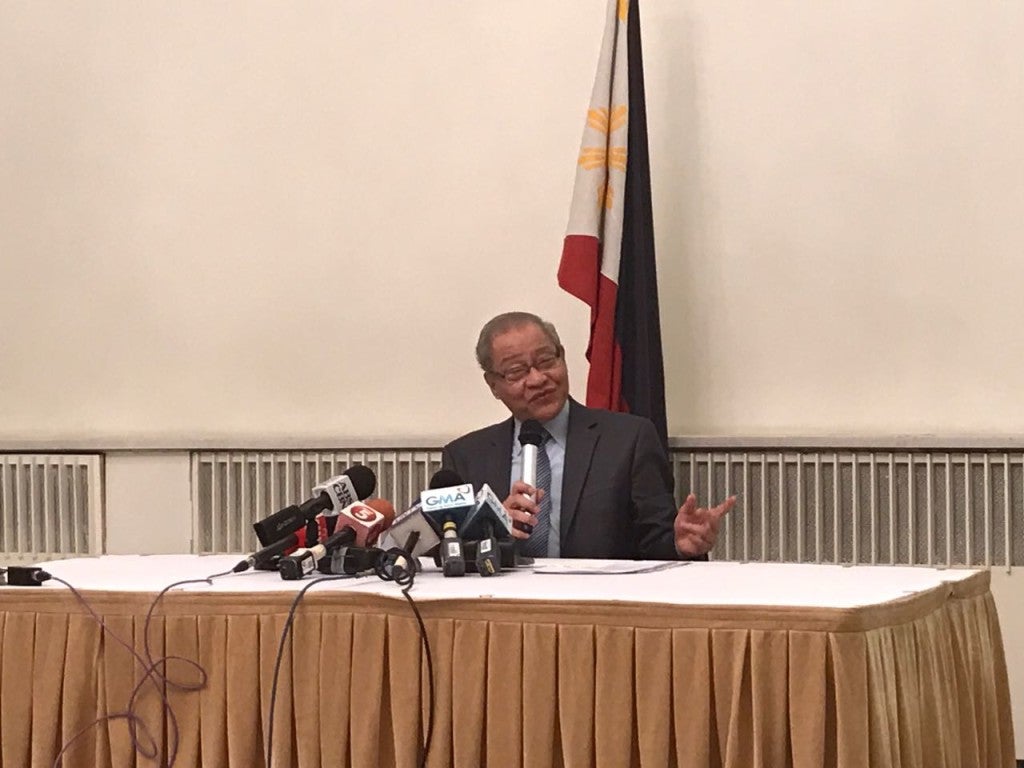 BEIJING – The bilateral consultative mechanism between the Philippines and China could be the proper venue to discuss the arbitral tribunal ruling that rejected China’s expansive claims in the South China Sea, amid concerns that the ruling was set aside in favor of Chinese economic perks, the Philippine envoy here said Wednesday.

But Philippine Ambassador to China Jose Santiago Sta. Romana said the ruling would not be raised during the inaugural meeting on May 19 at Guiyang City, Guizhou Province.

“This is the mechanism that could provide a setting for it. The question is at what point will you bring it up and the President’s instruction is quite clear: at the proper time,” Sta. Romana told reporters here.

Sta. Romana, who will lead the Philippine delegation, said it would be unwise to raise issues that would tend to divide both parties.

“We don’t start with the issue that will divide you. If there is a mechanism for discussing it, this is it. At the proper time as the President has said,” he said.

The envoy urged both parties “to give diplomacy a chance” amid criticisms that the Duterte administration’s handling of the issue was soft.

“Sometimes you have to give diplomacy a chance,” he said, citing President Rodrigo Duterte’s “friendly position” towards China.

“I think as I’ve said whatever we’re going to present on Friday will be in line with the President’s directive and the President’s directive is very clear: Find a peaceful and diplomatic approach to resolve the issue so as to preserve peace and stability and to further improve bilateral relations and to avoid confrontation, avoid violence that will lead to nobody’s benefit,” he said.

The envoy said the inaugural meeting would be meant to discuss the terms of reference, agenda and assess the situation in the South China Sea and exploring possible ways to manage the issue.

Several sessions would follow after the inaugural meeting where more sensitive issues would be discussed.

“This is in the sense the essence of the bilateral talks, you know, that you’re able to raise issues of concern to you to the other side,” he said.

Sta. Romana said the bilateral meeting was an opportunity for the Philippines and China to discuss more “in-depth” issues.

“You know, we engage in diplomacy with China so there is always opportunity. But here is where we can discuss it in a frank and friendly way and  go in depth on certain issues that is of concern to each side. So the Philippines is prepared to raise some issues and we expect the Chinese will raise certain issues that is of concern to them,” he said.

“So in the sense, we will discuss areas that have been – where we have differences and try to understand each other’s position, and try to explore ways of managing it or further easing the tensions in the South China Sea, in order to prevent any escalation or any possible confrontation or conflict,” he added.

Sta. Romana said tensions in the South China Sea had eased after Duterte made efforts to mend our strained relations with China.

The envoy cited that Filipinos could now return fishing to our traditional fishing ground in the disputed sea. But there reports of Filipino fishermen being harassed by Chinese Coast Guards still persist.

“There will be several sessions so the issue related to the South China Sea, that is of concern for Filipinos and that has become issues in the past couple of months. This is the mechanism that will be used to discuss this, to bring this up,” he said.

“This is in the sense the essence of the bilateral talks, you know, that you’re able to raise issues of concern to you to the other side, not through, again, not through the megaphone diplomacy, but through frank and friendly dialogue, he added.

Sta. Romana said the dispute won’t dissolve overnight, saying the inaugural meeting “is a significant first step in what could be a long journey.”

“But of course, we’re trying to find a way to resolve disputes, the territorial and maritime disputes, and to create the conditions for the final resolution. And if it will take time, we’ll manage it first so it does not become, it will not escalate into a confrontational situation,” he said.

He reiterated the government was employing a different strategy this time, saying that it wants to prevent a row with China from escalating.

“As I said, we are approaching a dual-track approach. This belongs to the non-contentious issues and this is exactly part of what the government has been trying to achieve, how the Philippine people can benefit from the track where there’s no dispute involved,” he said. “As for the separate track where contentious issues are being discussed, this bilateral consultative mechanism is exactly one mechanism that is being used so you have to put it on, you have to understand it from the point of view of different tracks and it doesn’t mean, as I said earlier, economic cooperation is one thing and the maritime dispute is another thing.”

Aside from the bilateral consultative mechanism, member-states of the Association of Southeast Asian Nations (Asean) and China would meet on May 19 to tackle the creation of a framework on the Declaration on the Code of Conduct of Parties in the South China Sea (DOC).

Sta. Romana said the meeting would be separate from the bilateral consultative mechanism./ac