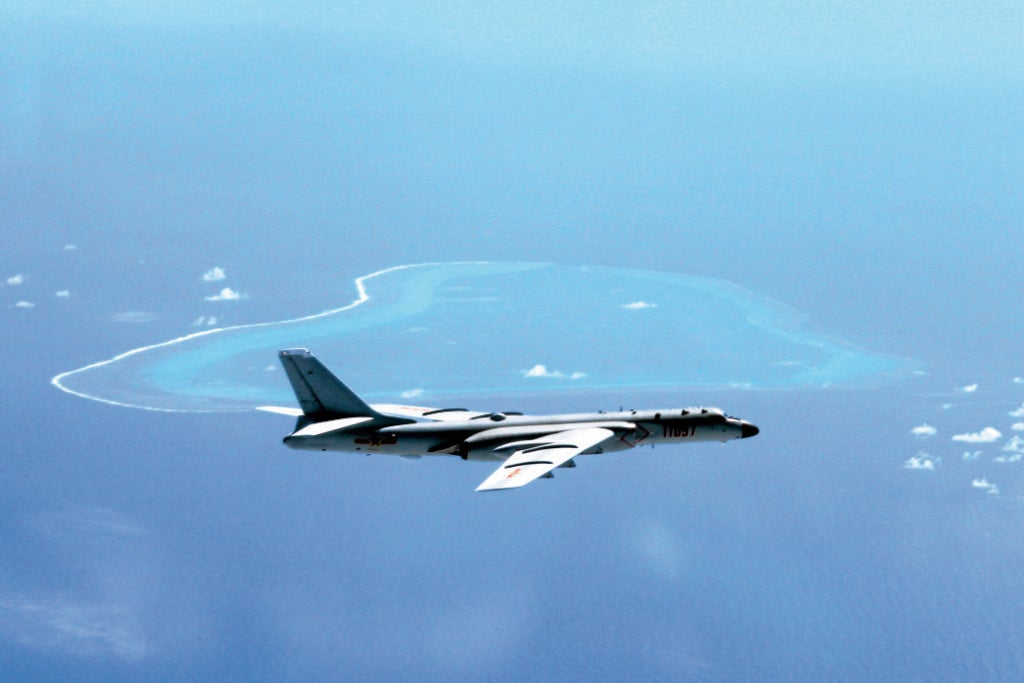 AIR SECURITY A Chinese bomber patrols the islands and reefs in the South China Sea in this undated photo released by Xinhua News Agency. —AP 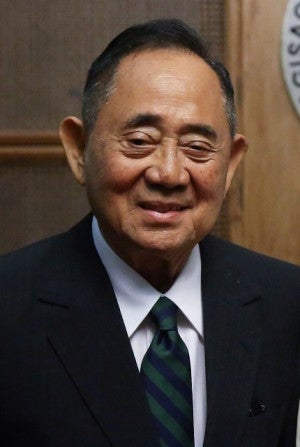 BEIJING—Philippine special envoy Jose de Venecia Jr. on Sunday called for joint exploration and development in the Spratly Islands as lawmakers at home cautioned the administration of President Duterte against entering into such “megadeals” with China, as these might compromise Manila’s stake in the maritime dispute with Beijing in the South China Sea.

De Venecia, speaking at the opening ceremony of the Belt and Road Forum hosted by China, highlighted the possible economic benefits of a joint exploration for oil and other resources in the Spratlys, a group of more than 100 islets, reefs and atolls in the middle of the South China Sea.

“[The] Philippines, China and Vietnam went so far as to venture on a three-way seismic survey that we helped initiate of the disputed areas in the Spratlys chain to assess the area’s potential for hydrocarbon exploration and development,” De Venecia said.

The study showed “promising” signs, the former Speaker of the House of Representatives told delegates from 30 countries, including heads of state, and representatives from international organizations attending the conference in Beijing.

Those signs now call for joint exploration, he said.

China claims almost all of the South China Sea, including waters close to the shores of the Philippines, Brunei, Malaysia and Vietnam, which also have rival claims to parts of the strategic waterway.

The Inquirer reported on Wednesday that the Philippines would enter into a deal with China for joint exploration for energy resources in the South China Sea, initially in uncontested areas “closer to the Philippines,” including Recto Bank.

The deal is expected to be signed during President Duterte’s visit to China this week. Mr. Duterte is attending the conference on the new Silk Road.

In his speech at the Silk Road conference, De Venecia emphasized the economic benefits of joint exploration, but he did not mention developments that complicated the territorial disputes in the South China Sea, including China’s building artificial islands in the Spratlys and topping them with military facilities.

In Manila, Akbayan Rep. Tomasito Villarin warned that a joint exploration deal with China that would leave Chinese incursions into the West Philippine Sea unresolved would amount to giving up the Philippines’ sovereignty over those waters.

House Minority Leader Danilo Suarez and Buhay Rep. Lito Atienza said there was nothing intrinsically wrong with entering into a joint venture with China provided there would be safeguards to ensure that the Philippines would not be put at a disadvantage.

But Villarin said such a move might not be wise at a time when Mr. Duterte should be focusing on asserting the decision in favor of the Philippines by the UN-backed Permanent Court of Arbitration in the case brought by Manila challenging Beijing’s claim to almost all of the South China Sea.

Mr. Duterte, who was elected last year, put the tribunal’s ruling on the back burner and concentrated on improving relations with China, which were soured by the arbitration case brought by his predecessor, Benigno Aquino III.

He visited China last October for an ice-breaking trip and returned home with billions of dollars in Chinese pledges of investment.

China has also eased its grip on Panatag Shoal, allowing Filipinos to fish there, but maintaining a maritime blockade it has thrown around the reef that it seized from the Philippines in 2012.

In November last year, after Mr. Duterte said he would revisit the tribunal’s ruling later in his term, Carpio said the administration should avoid “any language” that would imply the Philippines recognized China’s claim to Panatag Shoal.

China and the Philippines open talks on their dispute this week, according to the Philippine ambassador to Beijing, Jose Santiago Sta. Romana.

Sta. Romana told reporters on Saturday that the talks would take place in a Chinese city, but he declined to name it.

He added that the dispute between the two countries “cannot be resolved overnight.”

Sta. Romana also said Mr. Duterte’s presence in the Silk Road conference should not be seen as abandoning or “giving up” the Philippines’ claim of sovereignty in the West Philippine Sea.

He defended Mr. Duterte’s position, saying Manila was “proceeding from our own interests.” —WITH REPORTS FROM DJ YAP AND THE WIRES