The annual drills highlighted the sudden shift from the usual focus on maritime security to disaster response for this year, the first of the exercises under President Rodrigo Duterte.

Some of the scenarios shown to the media were extricating a victim in a cramped space using plastic tubes, rescues from a building, rescue drills involving structures near collapse, and moving heavy equipment manually.

Capt. Emeterio Armada, officer-in-charge of the urban search-and-rescue for the drills on the Philippine side, said these exercises would allow troops to be prepared when disasters or calamities strike.

Emeterio’s US counterpart 1st Lt. Nicholas Lange, said the drills were meant for them to train together and share tactics and techniques., adding that Filipino troops were very hands on and motivated in learning.

Specialist Manuel Soco, a Fil-Am participant from the Hawaii National Guard, said that theywere conducting these drills to at least prevent more casualties in future disasters.

“We don’t know when the disaster comes so we are ready to respond to that, we have the techniques,” he said. “Hindi yung wait ng tulong and wait for other countries. Our goal is to have less casualties.”

Observers from Thailand, South Korea, United Kingdom, Timor Leste, Singapore and Brunei were also present at the drills. They had been visiting from one Balikatan event to another to observe.

Col. Mike Page from the United Kingdom said the oberservers were looking at how they could assist in disasters since their calamities seldom hit their countries – at least not as much as they do in the Philippines.

“The UK is interested in how we can assist humanitarian disaster and relief situations not only in the Philippines but across Asean,” he said. “By observing you are able to stand back and take in what’s going on to reflect on what you see.” 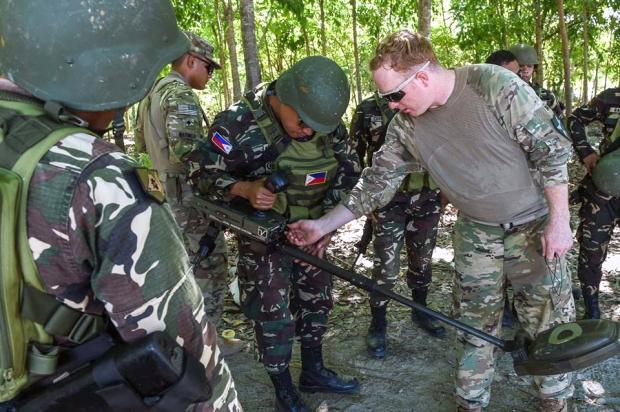 US Army Sgt. Brandon Laubscher (right) demonstrates the use of a Minehound VMR2 Dual Sensor Detector to a Filipino soldier during counter-improvised explosive device training for Balikatan 2017 at Fort Magsaysay in Santa Rosa, Nueva Ecija, May 8, 2017. (Photo from the Facebook page of Exercise Balikatan)

Aside from disaster response, another focus of this year’s Balikatan is counterterrorism but the activities were not open to the media.

A supposed chemical attack or accident or scenario was the only part of the counterterror exercise that was made public.

Troops in hazmat suits tried to get into a building abandoned by terrorists that contained chemicals that they had to get samples of. They later cleaned themselves before interacting with the public.

The scaled down version of this year’s drills is linked to the Duterte’s desire rebalance Philippine foreign policy. He wants to become less dependent on United States and has started to develop warmer ties with China and Russia.

Last year, Duterte said he would want joint Filipino and American drills scrapped. But he eventually softened his stance.

But other PH-US drills were scrapped – the Philippine Amphibious Landing Exercise (Phiblex) and Cooperation Afloat and Readiness Training (Carat), which focus on external and maritime security.

The Balikatan exercises is part of a Mutual Defense Treaty which the Philippines and the US signed in 1951. /atm