Wife, daughter with Duterte for 1st time on official trips 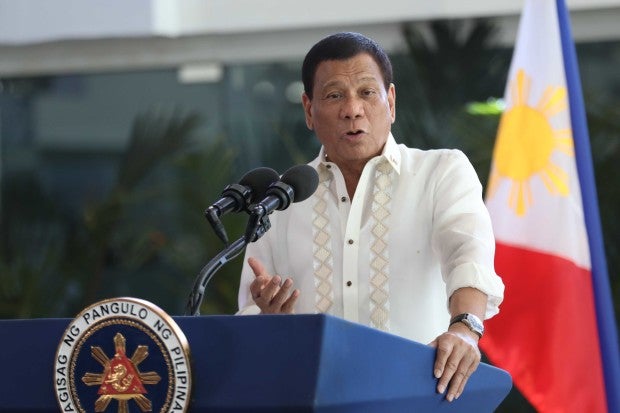 President Rodrigo Roa Duterte, in his speech at the Ninoy Aquino International Airport on May 10, 2017 prior to his departure for his official visits to Cambodia and China and working visit to Hong Kong, reveals that he has signed the appointment of Senator Alan Peter Cayetano as the new Foreign Affairs Secretary. (Photo from Malacañang)

President Rodrigo Duterte will have someone special to take care of him during his latest foreign trips that will take him to Cambodia, Hong Kong, and China.

Duterte’s partner Honeylet Avanceña and their daughter Veronica or “Kitty” will be joining him in an official overseas trip for the first time.

He said they were with him because it was vacation time, and he would also rather have Avanceña, who is a nurse, take care of him.

“I have some medications to take,” he said in a predeparture news briefing. “I do not want these nurses who are policewomen to keep on entering my room. Honeylet is a nurse and she can very well take care of me.”

“I mean, I would rather have my wife giving the medications because, you know, the strangers, they go in and out,” he added.

Being the President, he said he got “extravagant attention” from his medical attendants who would check his blood pressure constantly even if he was not ill, he said. He also said they have him use an oxygenation meter.

“You’re really like a patient. Then they will write it down because they are required by law to do that,” he said.

He gets tired of it, he said.

Duterte, who went on a three-country trip in the Middle East just last April, also insisted that he did not enjoy traveling.

“I hate to travel because it makes me dull already. Even a few hours, I get affected by jet lag,” he said.

He even fell asleep one time when he was in a bilateral meeting with a prime minister, who he did not name.

Then Foreign Affairs Secretary Perfecto Yasay nudged him awake, and he excused his acton by saying he had been thinking.

“I cannot do it anymore. That’s why I brought my family to tide me over,” he added.

Duterte will be in Cambodia to attend the World Economic Forum on Asean.

In Hong Kong, he will meet with members of the Filipino community.

In China, he will participate in the Belt and Road Program for International Cooperation in Beijing. He will meet with Chinese officials and the Mongolian Prime Minister. /atm