Duterte to Trump: ‘I’m tied up. I can’t make any definite promise’ 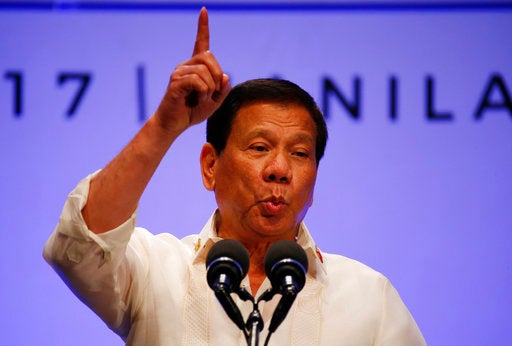 DAVAO CITY – President Duterte on Monday said he has yet to accept US President Donald Trump’s invitation to the White House, saying his tight schedule was preventing him to give a definite nod.

The two leaders, according to a White House statement, had a “very friendly conversation” on Sunday, when Trump called Mr. Duterte, with the two discussing the Philippines’ on going war against illegal drugs.

“I’m tied up. I cannot make any definite promise,” Duterte told reporters shortly after his tour to a visiting Chinese flotilla at a government port here, adding among his itinerary are the countries of Russia and Israel.

The White House said Mr. Trump’s invitation to the Philippine President was aimed at discussing the importance of the United States-Philippine alliance, which is now headed in a very positive direction.”

In his conversation with Mr. Trump, Duterte told the American leader of his concern with the volatile situation in the Korean peninsula, following North Korea’s missile launch.

“It’s the concern of everybody. Not only with us, both the Asean (Association of Southeast Asian Nations) guys. The heads of states also expressed their fear of an outbreak of the threat of a nuclear warhead,” Duterte said.

“Its fallout would include China, alam nila and pati tayo. And the Philippines is within striking distance of their missiles,” the President, who is chairperson of this year’s Asean, said.

He said he told Trump even as the latter has the “persuasive power” towards North Korea and its leader Kim Jong-Un, US still needed the intercession of China for a greatest chance of getting some dialogue with the reclusive communist state.

“There has to be some sense somewhere,” Duterte said.

“But I said, ‘Mr. President, I do not think that you can scare Kim Jong Un with a firepower,’” he added, apparently referring to the recent deployment of a US carrier strike group and a missile defense system on the Korean peninsula.