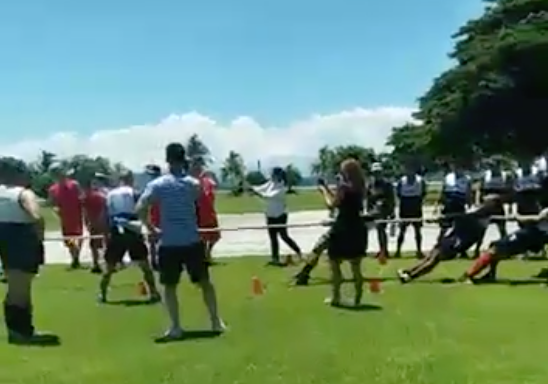 In basketball and tug-of-war matches at least.

Part of a goodwill visit by a three-ship flotilla of the People’s Liberation Army Navy (PLAN) in the hometown of President Duterte, the games at the Eastern Mindanao Command (Eastmincom) in Panacan came hours ahead of Mr. Duterte’s tour to one of the ships.

Duterte was welcomed by Chinese naval and diplomatic officials led by Chinese ambassador Zhao Jianhua, and given a tour to the ship before Chinese and Filipino sailors.

Clad in a white polo shirt and black pants, Mr. Duterte was accompanied to the ship by Defense Sec. Delfin Lorenzana and other Philippine military officials.

The President said he was impressed by the highly-equipped and modern ship, one of China’s largest warships.

“Very impressive. It’s clean and even the carpeting, it’s like a hotel, actually,” the President said, adding the vessel’s weaponry was computerized.

The President said the visit is part of a confidence-building measure between Manila and Beijing and “to show that we are friends.”

“That’s why I welcomed them here and I was the one who asked, ‘You show me your warships,’” the President said.

With the Chinese fleet’s visit, Duterte said he is open to let the Philippine military have a joint exercise with their Chinese counterparts.

“We can have a joint exercise here in Mindanao, maybe in the Sulu Sea,” the President said.

Duterte said while the visit will affirm the warming relationship with China, he said the Philippines will push for the repair of installations on Philippine-held islands in the West Philippine Sea.

This was in spite of the recent pronouncement by Ambassador Jianhua that whatever repairs the Philippines undertakes at the West Philippine Sea is deemed illegal.

The President was given a black and gold Chinese navy cap as a souvenir, which he put on as he emerged from the Chinese destroyer.

“Repair lang naman (Just repair works),” Duterte said. “Well they can always look the way around. We have been there since 1974 by the way,” Duterte stressed.

Lorenzana said the visit of the Chinese fleet was meant to develop deeper understanding and cooperation between the two countries.

“We need also this visit to have a better understanding kung papaano natin ma-resolve ang (how to resolve the) dispute (with China) in the West Philippine Sea,” Lorenzana said.

He also reiterated the President’s position about pushing for the repairs of the runway in Pag-asa Island off western Philippines, which the country has been controlling since the ’70s, saying the Chinese Nine-Dash Line which Beijing used as basis for its overlapping claims in islands in the West Philippine Sea has no basis in international law./ac