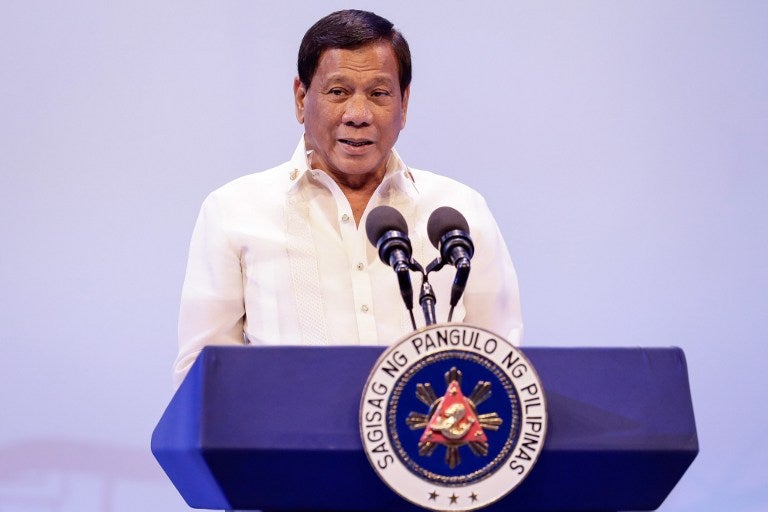 President Rodrigo Duterte on Saturday did not mention the maritime disputes in the Association of Southeast Asian Nations (Asean) region with China in his statement for the opening of the 30th Asean summit here in Manila.

In his speech he delivered before Asean heads of state during the opening of the summit at the Philippine International Convention Center (PICC), Duterte broadly referred to “disputes” which the Asean member states must resolve peacefully based on relationship that is grounded on “mutual respect and benefit.”

Duterte did not make any reference to respect for diplomatic processes, and instead used the phrase “supremacy of the law.”

China is lobbying for the Philippines to drop any reference to international law in Duterte’s chairman’s statement which will be released at the end of the summit, Agence France-Presse (AFP) reported.

The chairman’s statement meant to reflect the views of all Asean leaders would neither mention the international tribunal ruling nor China directly, according to a draft obtained by AFP. Philippines is this year’s Asean chair.

“We shared the serious concerns expressed by some leaders over recent developments and escalation of activities in the area which may further raise tensions and erode trust and confidence in the region,” the draft statement read.

China had also lobbied for the removal of the phrase “respect for legal and diplomatic processes” in the chairman’s statement, a request AFP reported Duterte is likely to accede to.

The phrase would reportedly be replaced with “respect for the full supremacy of the law.”

True enough, Duterte did not make any mention of diplomatic process and instead used the phrase “supremacy of law.”

“Relations also remain solid if all stakeholders learn to respect and value the peaceful resolution of disputes,” Duterte said.

“In an era where there can be much uncertainty, we must faithfully adhere to the supremacy of the law and rely on the primacy of rules as responsible members of the international community,” he added.

He did not specifically single out China, who has overlapping maritime claims with the Philippines, Brunei, Malaysia and Vietnam over the South China Sea.

Duterte earlier said he saw no point in raising the Permanent Court of Arbitration ruling favoring the Philippines’ maritime claims over the West Philippine Sea and invalidating China’s nine-dash line claiming most of the disputed waters, because it was an issue between Manila and Beijing only.

READ: Duterte: Arbitral ruling not an issue for Asean

Duterte also vouched for the non-interference principle of the Asean region, a principle the Asean Parliamentarians for Human Rights criticized as an excuse by the region’s governments in blocking human rights protections under international law.

“Our engagement with Dialogue Partners allowed us to set the table for meaningful discussions on maintaining peace and stability, the pursuit of development goals, the peaceful resolution of disputes, and the promotion of our peoples’ welfare,” Duterte said.

Duterte also called on the Asean leaders to respect each countries’ independence in the region and find their place in the international arena.

READ: Duterte calls for respect for independence in debut as Asean host

“Let me say again: relations bear fruit when they are based on mutual respect and benefit,” Duterte said.

“Dialogue relationship shall be made more productive, constructive if the valued principle of non-interference in the internal affairs of the Asean member states is observed,” he added.

READ: Duterte: People should understand the importance of Asean