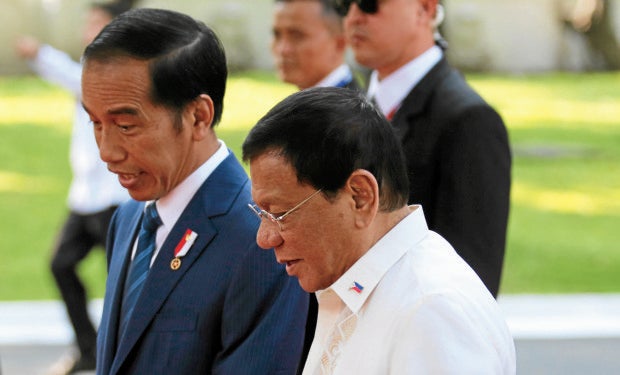 Indonesian President Joko Widodo and President Duterte are all smiles during the welcome ceremonies in Malacañang on Friday.

President Rodrigo Duterte and Indonesian President Joko Widodo did not mention the case of convicted drug trafficker, Mary Jane Veloso, the Filipino who is on Indonesia’s death row, in their statements following their meeting in Malacañang on Friday.

Veloso’s case was not tackled during the expanded bilateral meeting between the two leaders and their officials, according to presidential spokesperson Ernesto Abella.

But Abella could not say as yet if the matter was taken up in the private meeting of Mr. Duterte and Widodo.

“It would be preemptive to say as well if it was discussed during their private meeting,”Abella said.

Mr. Duterte earlier said that the opportune time to bring up Veloso’s case was during his restricted meeting with Widodo, which was held prior to their bilateral meeting in Malacañang.

But prior to Widodo’s arrival at the palace, Mr. Duterte said he would honor Indonesia’s laws.

“We will not impose. We will not demand. Nothing,” he told reporters.

Asked if he will seek the commutation of Veloso’s sentence with Widodo, he said: “Those are one of the things that are there. Maybe I’ll … As a Filipino, I have a stake there also.”

He said he also wanted to thank Indonesia for the reprieve for her.

Veloso’s execution had been deferred after the Philippines said her testimony was needed in the human trafficking case filed against her recruiters who convinced her to work abroad.

In Nueva Ecija, Veloso’s father, Cesar Veloso, appealed to President Duterte to save his daughter, stressing that she was innocent and was only duped by her Filipino recruiters, who are also facing trial for estafa and human trafficking.

“I now appeal to our President to discuss this matter with the president of Indonesia so my daughter can be set free,” the elder Veloso said. “Have pity on her. She did not commit any crime. She was a victim.”

Veloso was caught with a bag containing 2.6 kilograms of heroin at an Indonesian airport in 2010. She was sentenced to death in October 2010, but Widodo stayed her execution in 2015.

Widodo said they agreed to strengthen cooperation on the protection of their citizens as well as of Asean migrant workers.

He said they vowed to begin soon the trilateral maritime patrols in the waters between their countries, which have been beset with incidents of piracy. They would also work together on counterterrorism matters.

On maritime limitations, the Indonesian president said he and Mr. Duterte agreed to conclude the exclusive economic zone ratification this year, and encourage the immediate conclusion of the continental shelf delineation.

Widodo also said he would continue to encourage Indonesian companies to participate in the retail sectors and infrastructure development in the Philippines.

Mr. Duterte said he and Widodo were ready to cooperate against the trade of illicit drugs and other transnational crimes, as well as terrorism, violent extremism and piracy at sea. He also thanked Widodo for Indonesia’s support for the peace process in Mindanao.

Mr. Duterte and Widodo witnessed the signing of two agreements—the Memorandum of Understanding (MOU) on Agricultural Cooperation and the Joint Declaration on the Establishment of Sea Connectivity between Davao, General Santos and Bitung.

The sea connectivity declaration encourages the establishment of routes between the cities mentioned and the designation of ports for this purpose, as well as regular consultation and the implementation of measures to ensure that safety standards are met.

The two leaders will launch the maiden voyage of the Ro-Ro (roll on, roll off) vessel using the route on Sunday. Mr. Duterte said this deserved full support because it would  facilitate trade and movement of goods.

The MOU on Agricultural Cooperation intends to strengthen the development of the Philippines and Indonesia’s agricultural sectors through cooperation on agricultural research, mutual consultation and assistance. —WITH A REPORT FROM ARMAND GALANG