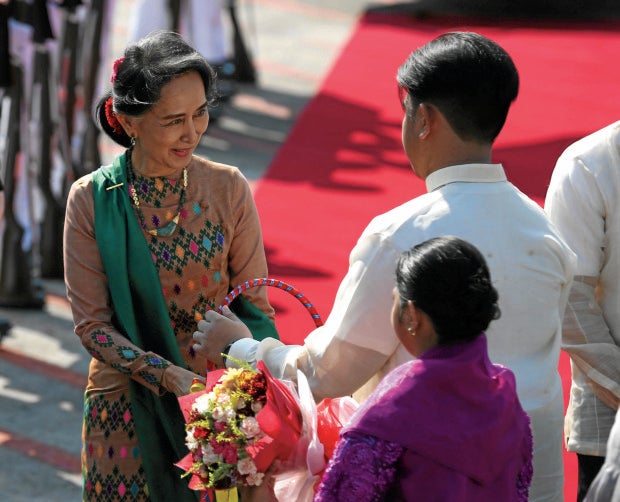 The popular democracy icon of Burma (Myanmar), Aung San Suu Kyi, joined seven heads of state on Friday as they arrived one after the other to attend the 30th Association of Southeast Asian Nations (Asean) summit at the weekend.

Like Mr. Duterte, Phuc became head of state last year.  He is a member of the 12th Politburo (Political Bureau) of the Communist Party of Vietnam.

Prayut served as the commander in chief of the Royal Thai Army before he became prime minister in 2014. He concurrently heads the National Council for Peace and Order.

He was on an official visit to the Philippines in August 2015, which was his first time to be in the country as head of state.

Last to arrive was Singapore Prime Minister Lee Hsien Loong aboard a Gulfstream G550 around 5:30 p.m.

But it was Burma’s democracy icon Suu Kyi who has captured the public’s attention over recent years. In 2005, the late President Corazon Aquino called for the unconditional release of Suu Kyi on her 60th birthday.

In 1991, she was awarded the Nobel Peace Prize, serving to call world attention to her cause and eventually bringing reforms to junta-ruled Burma.

In 2015, her political party swept elections, but she was prevented from the presidency because her children were foreigners. She instead assumed the newly created post of state counselor which is similar to prime minister.

On Friday, she was welcomed by a top Philippine delegation. Wearing her trademark dress decked with colorful geometric patterns and flowers in her hair, the 71-year-old greeted enthusiastic well-wishers.

She arrived at a time when international backers however are distancing themselves from her because of her continued silence on the Burmese army’s bloody crackdown against Rohingya Muslims.

Poor progress in legal and economic reforms, a stalling peace process and a surge in online defamation cases have left many also disillusioned with Burma’s first civilian government in generations. —WITH A REPORT FROM AFP