President Rodrigo Duterte has found an ally in Brunei in his war against illegal drugs.

In a joint statement with Duterte, Sultan Hassanal Bolkiah vowed to cooperate with the Philippines in addressing illegal drugs.

“We also look forward to our future collaboration in addressing issues on drugs. We believe that both sides will benefit from the exchanges of expertise and best practices in this area,” Bolkiah said.

For his part, Duterte thanked Brunei for its role in achieving lasting peace in Mindanao.

“Peace and development in Mindanao remain a key area of convergence for the Philippines and Brunei Darussalam. As I recognized Brunei’s role in the peace process in the southern Philippines, I sought and received support for efforts to spur and sustain growth in Mindanao,” he said. 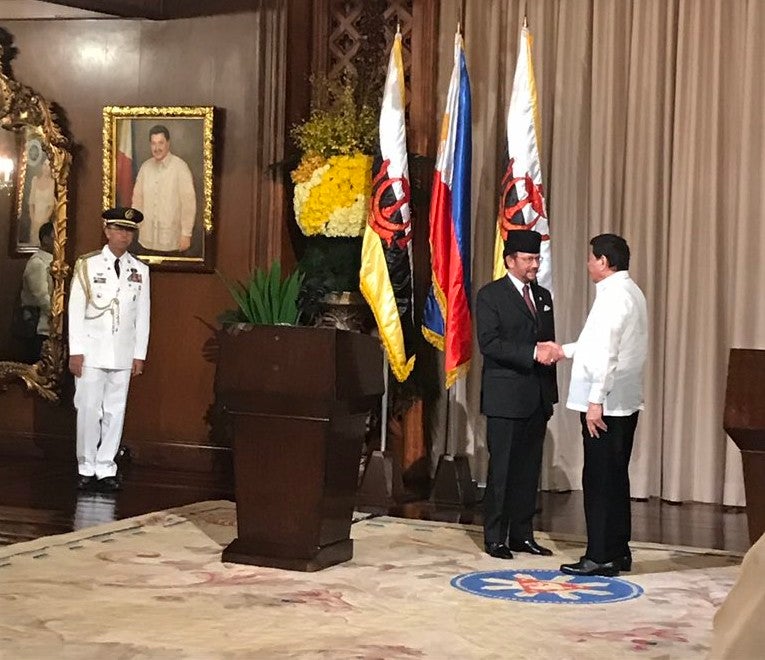 Bolkiah expressed optimism on the peace talks of the government with the communist rebels.

“Our defense links are closer than ever through our participation in the International Monitoring Team in southern Philippines. The ongoing peace initiative will promise a prosperous future for your people and have a far-reaching impact upon our region,” he said.

Duterte and Bolkiah also vowed to work together in combatting terrorism, violent extremism, and piracy at sea.

“We welcomed intensified interactions and exchanges between our Governments and resolved to utilize the Joint Commission for Bilateral Cooperation or JCBC, mechanism to chart future paths to review the progress that we have made,” Duterte said. “These include waging a committed and principled campaign against terrorism, violent extremism, and piracy at sea.”

Both leaders also witnessed the signing of agreements on cultural cooperation and cooperation in Halal industry and Halal products and services.

“With shared aspirations of achieving greater peace, progress and prosperity for our peoples, we agreed to further step up collaborative efforts to achieve common goals,” Duterte said.

Duterte also thanked Bolkiah “for the gracious hosting of Filipinos in Brunei.”

“They are living symbols of friendship between our people and the special care and concern of His Majesty,” he said.

Duterte said he and Bolkiah agreed to work together for the peaceful resolution of the maritime dispute in the South China Sea.

“We will work together to ensure that the principled position for the peaceful resolution of disputes will be articulated fully,” he said.

“This is a collective interest that must be upheld in the implementation of the Declaration of the Code of Conduct and greater progress on the Framework of Code of Conduct in South China Sea,” he added. “As we seek peace, stability and security in the vital waters of South China Sea, we must remember that we have duties as responsible members of the international community which we must abide.”