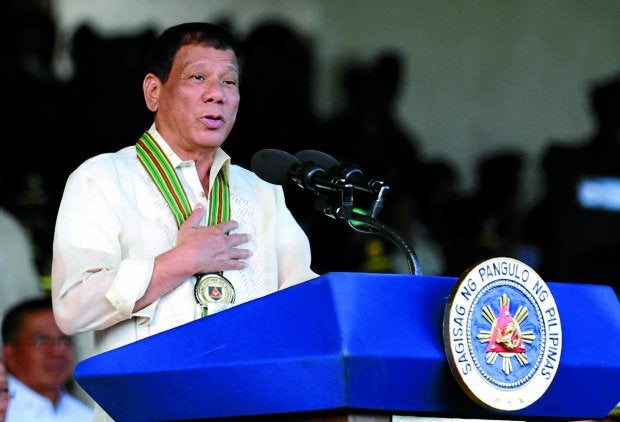 “This is a man who must be stopped.”

In yet another strongly worded piece on the spate of killings in the Philippines, the New York Times (NYT) editorial board on Wednesday called on the International Criminal Court (ICC) to “stop” President Rodrigo Duterte and launch an initial investigation into summary executions amid his administration’s so-called war on drugs.

The editorial, titled “Let the World Condemn Duterte,” touched on the case of crime against humanity filed against Duterte and 11 other officials before the ICC by lawyer Jude Josue Sabio, counsel of confessed Davao Death Squad hitman Edgar Matobato.

“The ICC should promptly open a preliminary investigation into the killings… After he was elected president last year, Mr. Duterte took the killing campaign nationwide, effectively declaring an open season for police and vigilantes on drug dealers and users,” the NYT editorial board said.

“There is already more than enough evidence for a preliminary investigation, which would send an unmistakable signal to Mr. Duterte that he may eventually have to answer for his crimes, and would encourage governments to take measures against him, such as imposing tariffs on Philippine goods,” it added.

But the editorial acknowledged that the ICC may be “reluctant” to prosecute Duterte because of his “enormous” popularity among Filipinos. Duterte has maintained majority satisfaction and trust ratings in the first quarter of 2017, according to recent surveys by Pulse Asia and Social Weather Stations.

It also noted that the ICC was created to “prosecute cases of genocide, crimes against humanity and war crimes among member countries only when their national courts are unwilling or unable to do so.”

“Those conditions might be met if the Philippines House of Representatives, dominated by Mr. Duterte’s allies, quashes, as expected, an impeachment motion filed by an opposition lawyer,” the editorial read.

“And if the findings of Mr. Sabio, Human Rights Watch, Amnesty International and politicians, or the confessions of the former death squad members, are not enough evidence, there are Mr. Duterte’s savage words. “Hitler massacred three million Jews. Now, there is three million drug addicts. I’d be happy to slaughter them,” he told reporters in one of his most outrageous statements (and misstating the figure for the Holocaust, which is six million). This is a man who must be stopped,” it added.

READ: What ‘filing’ a ‘complaint’ in ICC means

Duterte is facing an impeachment complaint filed by the Magdalo party-list group over his bloody war on drugs and his alleged mishandling of the South China Sea dispute.

In October last year, ICC chief prosecutor Fatou Bensouda said the Court would be “following developments in the Philippines in the weeks to come and record any instance of incitement or resort to violence with a view to assessing whether a preliminary examination into the situation of the Philippines needs to be opened.”

“My Office is aware of worrying reported extra-judicial killings of alleged drug dealers and users in the Philippines…I am deeply concerned about these alleged killings and the fact that public statements of high officials of the Republic of the Philippines seem to condone such killings and further seem to encourage State forces and civilians alike to continue targeting these individuals with lethal force,” Bensouda then said.

“Let me be clear: any person in the Philippines who incites or engages in acts of mass violence including by ordering, requesting, encouraging or contributing, in any other manner, to the commission of crimes within the jurisdiction of the ICC is potentially liable to prosecution before the Court,” she added.

The latest NYT editorial follows the release of other pieces critical of Duterte in previous months, including a news feature titled “Becoming Duterte: The Making of a Philippine Strongman,” another editorial titled “Accountability for Duterte,” and a video documentary titled “When a President Says ‘I’ll Kill You.’” The publication also won the prestigious Pulitzer Prize in Breaking News Photography for its photo essay on the war on drugs “They Are Slaughtering Us Like Animals.”

Malacañang earlier accused the NYT of being part of a “well-funded demolition job” against President Duterte. IDL

Drug war on NY Times: ‘We no longer have fear in killing people’