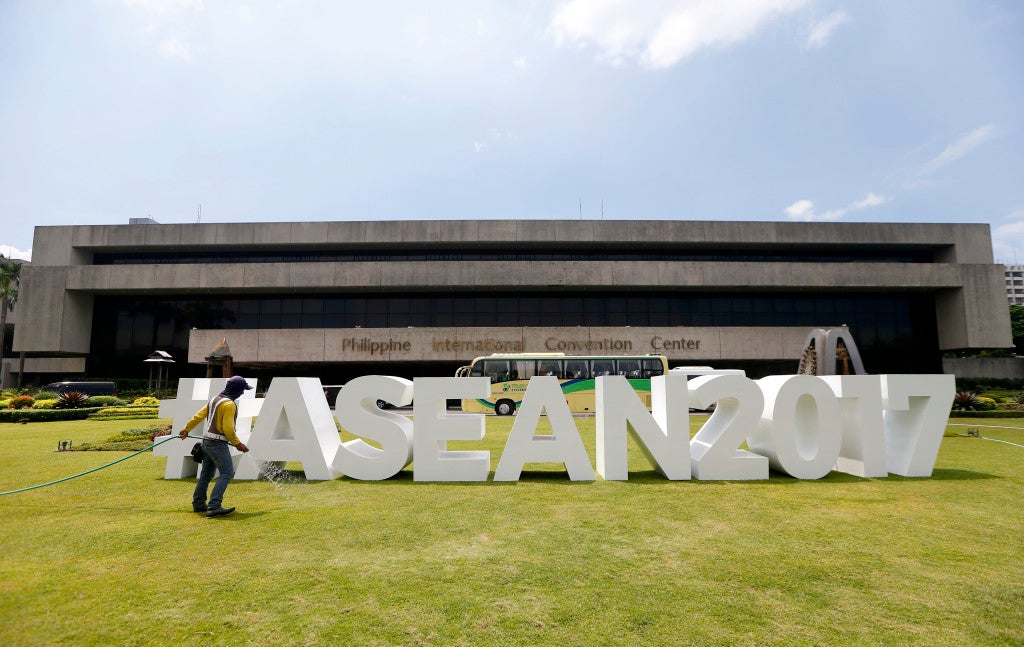 A worker waters the lawn of the Philippine International Convention Center, the venue for the April 26-29, 2017 30th ASEAN Leaders’ Summit, Tuesday, April 25, 2017 in suburban Pasay city south of Manila,Philippines. The Philippines is hosting the summit of  the 10-member ASEAN (Association of Southeast Asian Nations) with the theme: Partnering for Change, Engaging the World.” More than 40,000 police and troops are mobilized for the summit.(AP Photo/Bullit Marquez)

MANILA — It’s a touchy topic in a country where thousands have been killed in a brutal drug war, but human rights should be addressed head-on as Manila plays host to the 30th Association of Southeast Asian Nations (Asean) Summit this week, regional parliamentarians say.

The Asean Parliamentarians for Human Rights (APHR) urged leaders from the 10-member bloc to rethink its “non-interference” principle, which tended to prevent meaningful dialogue on awkward subjects, and to not shy away from issues confronting the region.

APHR cited rampant extrajudicial killings, “most prominently in the context of the brutal drug war being waged in the Philippines,” under the auspices of President Duterte, whose disdain for human rights organizations has been well-known.

The group also raised alarm over the situation in Myanmar, where the United Nations recently warned that crimes against humanity and ethnic cleansing of the country’s Rohingya Muslim ethnic minority might have
occurred.

“The accelerating erosion of democracy and human rights protections threatens to undermine the progress of Asean integration and yield a weaker regional bloc that fails to live up to its people-centered claim,” said APHR chairperson Charles Santiago, a member of the Malaysian Parliament.

In a statement, his group expressed concern about a number of developments in the Asean, including increasing government restrictions on freedom of expression, association, and assembly and threats to civil society.

The 30th Asean Summit began Wednesday and would continue through Saturday in the first of two annual meetings of Asean leaders this year. Mr. Duterte is hosting the meeting in his capacity as Asean chair.

The APHR parliamentarians urged Asean leaders to heed the voices and concerns of civil society groups and to create enabling environments and ensure meaningful consultation with NGOs and grassroots people’s organizations in regional and national policymaking.

“As elected representatives of the people, we urge heads of government… to incorporate stronger consultative mechanisms at the regional level that engage all voices, including women and youth, and allow space for civil society to operate in all Asean countries without government interference,” said APHR vice chair Mu Sochua, a member of the Cambodian National Assembly.

APHR acknowledged that discussing human rights might be difficult and uncomfortable as the regional bloc had always avoided confronting each other on domestic troubles under a non-interference policy.

But the parliamentarians argued that such a principle “constitutes a barrier to human rights protections recognized under international law.”

“The idea of ‘non-interference’ serves as convenient cover for some governments when it comes to issues they don’t want to address,” Santiago said.

“The fact is, however, that interference does take place in the economic realm without objection, so leaders must acknowledge the need to discuss whether the policy is really fit to take the grouping forward. It should be tabled for discussion at least,” he added.

APHR is a “human rights intervention force of current and former parliamentarians, who use their unique positions and innovative means to prevent discrimination, uphold political freedom, and promote democracy and human rights throughout the region.”

Seven Asean countries are represented in the group’s board, including former Akbayan congressman and academic Walden Bello of the Philippines.  SFM