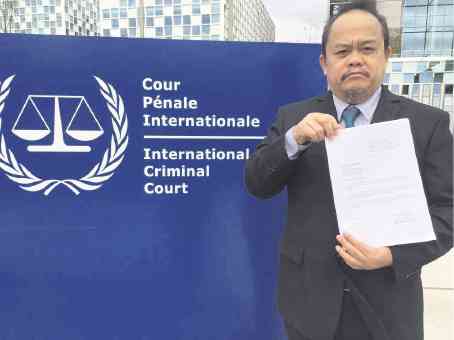 When President Duterte says “I will kill you,” it is not mere rhetoric. He makes sure it is carried out.

This is one of the key arguments of lawyer Jude Josue Sabio in the information he submitted to the International Criminal Court (ICC) in asking for the investigation of Mr. Duterte and 11 other officials for extrajudicial killings in Davao when Mr. Duterte was mayor of that city and in the President’s war on drugs.

Solicitor General Jose Calida, one of the other officials Sabio wants the ICC to investigate, on Tuesday threatened to bring a case for Sabio’s disbarment.

“We will see him in court,” Calida said in a statement. “It appears that this lawyer is in the business of maliciously filing baseless suits based only on hearsay and unfounded suspicions.”

Justice for the murdered is the reason for the ICC complaint, Sabio said in an e-mail to the Inquirer on Tuesday.

“More than 1,400 killed by then death squad Mayor Duterte through his Davao Death Squad in Davao City and for the more than 7,000 killed by him as Death Squad President at the national level in his war on drugs,” he said.

Sabio, lawyer for confessed Davao Death Squad (DDS) hit man, Edgar Matobato, expressed confidence that the ICC would charge Mr. Duterte and the others and order their arrest.

In the information, Sabio said that Mr. Duterte as mayor of Davao and as President, had not invoked the full force of the law to arrest, investigate, prosecute and imprison criminals.

“He did not couch his serious threat in a language that reflects an abiding respect for the sanctity of human life, due process and rule of law.  He did not threaten that way,” Sabio said in the information.

“What he uttered in public is a serious threat to kill, nothing more, nothing less.  He did not even threaten to just cause bodily harm.  He did not also say that the police should kill criminals in self-defense.  His public threat to suspected criminals is so simple, that is, ‘I will kill you,’” he said.

“As borne out by records, President Duterte, as then mayor, as presidential candidate and even as President, would keep on repeating this serious threat to kill, which is punishable as a crime under the Revised Penal Code of the Philippines,” he added.

Sabio pointed out that Mr. Duterte made all those threats to kill in public speeches and comments to the press, even before the Senate testimonies of Matobato and fellow DDS whistle-blower Arturo Lascañas.

Sabio said the public might have construed the President’s language as bravado or “political propaganda” but the testimonies of Matobato and Lascañas showed that the “mental state” of Mr. Duterte indicated he was aware and had personal knowledge of the killings.

To emphasize this point, Sabio highlighted in the information Mr. Duterte’s claim, shortly after being elected President, that he knew who killed broadcaster Jun Pala in Davao City.

Lascañas testified to the Senate that it was Mr. Duterte who ordered him to assassinate Pala.

Sabio pointed out that when Mr. Duterte was mayor, he said that killing suspected criminals was the “best practice” that made Davao City among the safest cities in the world—and carried the practice on as President.

“Having already known about the fact of the Davao Death Squad, we do now know also as a fact that President Duterte means only the same simple thing in his war on drugs at the national level, that is, to literally kill suspected 100,000 drug pushers or even 3 million drug addicts under the same ‘best practice,’ strategy or system utilized by him through his Davao Death Squad in Davao City,” Sabio said.

In threatening to bring a disbarment case against Sabio, Calida said the lawyer was “a compliant stooge of the yellow cult who planned to destabilize the Duterte government because they do not have the numbers to impeach the President.”

Calida was apparently referring to the Liberal Party.

He noted that Sabio was punished by the Supreme Court in 2005 for accusing a Laguna judge of bribery.

Calida said the Supreme Court also warned Sabio that a similar offense “or similar questioned act will be dealt with more severely.”

He said Sabio was a “perennial loser [who] stubbornly refused to heed the warning from the Supreme Court that if he commits the same infraction, he will be punished more severely.” —WITH A REPORT FROM MARLON RAMOS