A few dozen of troops, mostly Marines, Navy, Air Force and Coast Guard, are deployed on rotation every three months on the nine islands and reefs occupied by the Philippines in the Kalayaan Island Group (Spratlys), including Pag-asa.

Pag-asa Island, the biggest territory occupied by the Philippines in the Kalayaan Island Group, is paradise with its pristine waters and white sand, but it could get lonely because of lack of leisure. For civilians, staying there is more of a choice, and it is to keep the Philippine claim of sovereignty.

For Soliven, to be assigned there is a privilege, however challenging it may be.

Lorenzana’s visit to the island with the military’s top brass on Friday was evidently a morale boost for the troops. He made it clear that they are not abandoned. 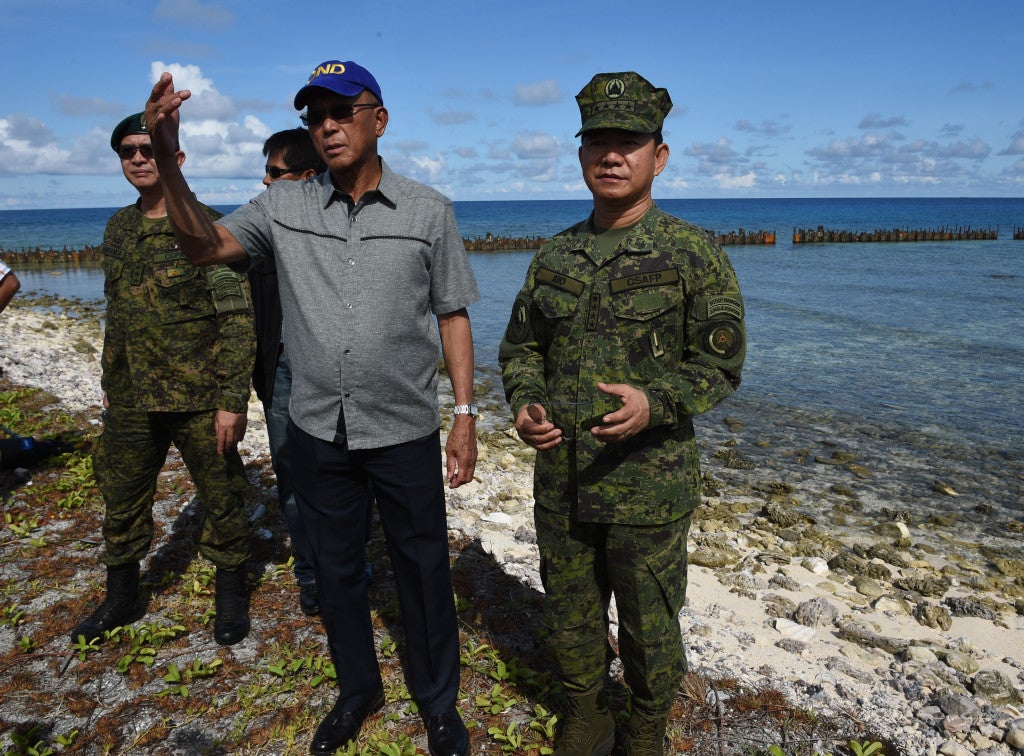 Philippine Defense Secretary Delfin Lorenzana (3L) gestures as he and military chief Eduardo Ano (R) inspect the runway of the airport during a visit to Thitu island in The Spratlys on April 21, 2017. AFP

He also promised a taller flag pole for the neighboring countries to see.

Later in a press briefing, he explained that the visit was to look at the conditions of the people staying here.

“This is just a normal visit within our territory, which is we believe and we know that it is our territory. We are visiting to look at the conditions of the people here,” he said.

Lorenzana also announced that a budget of at least P1.6 billion was allocated for the improvements of the facilities there, including the unpaved 1.3 kilometer airstrip that is dangerous for landing big planes.

He also revealed plans to turn the island into a tourism destination.

While the Philippines has occupied the island for about four decades, it has been left behind by its neighboring countries. Some 20 kilometers away is Zamora (Subi) Reef, one of China’s largest outposts in the Kalayaan Island Group, complete with a runway, lighthouse and radars.

China has protested Lorenzana’s visit to Pag-asa, saying they were “gravely concerned about and dissatisfied by the island visits.”

“We hope that the Philippine side could cherish the hard-won sound momentum of development the bilateral relations are experiencing, faithfully follow the consensus reached between the two leaderships, maintain general peace and stability in the South China Sea,” China’s Foreign Ministry spokesman Lu Kang said.

But Defense spokesperson Dir. Arsenio Andolong said on Sunday that Lorenzana’s visit was just one of his many responsibilities as defense chief.

“He routinely inspects all facilities under the department’s administrative supervision. Pag-asa Island is one of those facilities,” he said.

Andolong added that the trip was meant to see what is needed to improve the living conditions, safety and personal security of Filipinos on the island.

Armed Forces chief Gen. Eduardo Año said that on their part, they visited the island to check on the troops manning the territory.

“There is nothing wrong with our visit. It’s part of my job. We never land in any island except ours where our troops are stationed. Pag-asa is a municipality of Palawan,” he said. JE