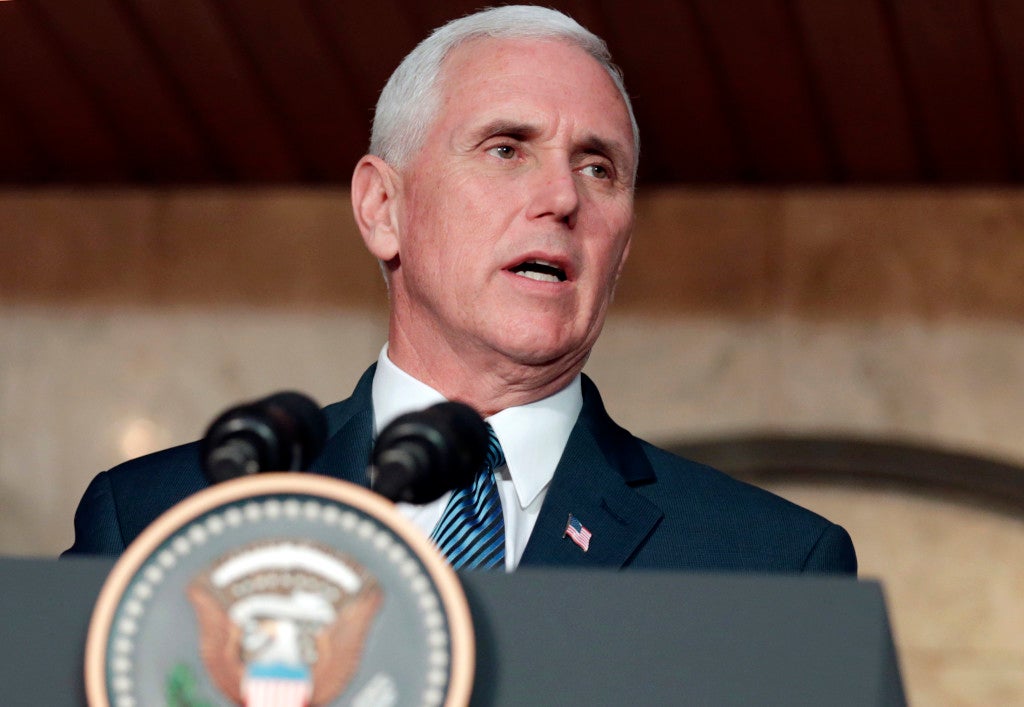 U.S. Vice President Mike Pence delivers a speech during his visit at the ASEAN Secretariat in Jakarta, Indonesia, Thursday, April 20, 2017. Pence praised Indonesia’s democracy and moderate form of Islam on Thursday alongside the president of the world’s most populous Muslim nation, reinforcing his message with a visit to the region’s largest mosque. (Mast Irham/Pool Photo via AP)

JAKARTA, Indonesia — Southeast Asia, a focus of past U.S. presidents, has been overlooked thus far for the Trump administration, but Vice President Mike Pence’s visit to Indonesia Thursday marked a sign of change and he announced the president would follow him to the region later this year.

Anxious Southeast Asian governments are looking for America’s commitment to counter China’s economic and military clout. Vietnam’s foreign minister is in Washington this week, and the top diplomats of the region’s 10-nation bloc are expected to arrive en masse in early May, amid concerns their interests were being crowded out as President Donald Trump prioritizes Mideast counterterrorism, traditional alliances in Europe and North Korea’s nuclear and missile threats.

Pence’s stop in Jakarta on a 10-day swing through the Asia-Pacific, meeting with Indonesian President Joko “Jokowi” Widodo, sends a message that Trump’s interests in Asia extend beyond North Korea and the massive U.S. trade imbalance with China. It is the first to Southeast Asia by a top administration official, and Pence announced Thursday that Trump will attend the annual summit of the Association of Southeast Asian Nations, or ASEAN, in November.

Washington is “taking steps to strengthen our partnership with ASEAN and deepen our friendship,” Pence said, resolving to strengthen economic ties and security cooperation in combating terrorism and in the disputed South China Sea.

This year marks ASEAN’s 50th anniversary. November’s gathering is being held in the Philippines, setting the stage for an encounter between two unconventional leaders: Trump and the host, Rodrigo Duterte, the Philippine president who is sometimes likened to the American leader because of his outspokenness and unashamed populism. Duterte’s government welcomed Pence’s announcement that Trump would attend.

U.S.-Philippine relations are strained over Duterte’s war on drugs, and his brash efforts to forge closer ties with China. President Barack Obama scrapped a planned meeting last fall after Duterte cursed him. Before that, Obama engaged Southeast Asia more than any U.S. president since the aftermath of the Vietnam War and made ASEAN summits a virtual fixture in his diplomatic calendar.

Among Obama’s foreign policy accomplishments: Promoting democratic reform in Myanmar, on communist China’s doorstep. He stood up, albeit unsuccessfully, against Beijing’s construction of artificial islands that can give it a strong military foothold in the South China Sea. He paved the way for a bigger U.S. military presence in the Philippines, where American bases were shuttered 25 years ago.

Obama also understood the importance of showing up. He made nine trips to Southeast Asia, became the first sitting U.S. president to visit former adversaries Myanmar and Laos, and was first to travel to Malaysia in more than four decades.

Trump got off on the wrong foot.

His “America First” rhetoric and abrupt withdrawal from Obama’s pan-Pacific trade pact raised fears of U.S. protectionism hurting the region’s 600 million people. They do $225 billion in trade with the U.S. each year. Trump’s relationship with Beijing remains unclear and his unorthodox foreign policy has begged the question as to whether he could ease U.S. demands on the South China Sea to win Chinese cooperation on North Korea.

“The region very much wants to know where the United States is going to stand on the South China Sea, and more broadly what its approach to China is going to be,” said Amy Searight, a former top U.S. defense official for the region.

Senior State Department official Patrick Murphy told reporters Thursday that the U.S. would continue freedom of navigation operations in the South China Sea. Those U.S. Navy maneuvers through disputed waters were conducted periodically under Obama but have not occurred since Trump took office three months ago.

Still, the future of economic ties is probably the region’s top concern. China is the main trading partner for most of Southeast Asia, although the U.S. remains a key source of foreign investment. The TPP’s demise leaves an alternative pact as the main avenue for boosting trade among the fast-growing economies. China is a part of that negotiation, while the U.S. isn’t.

Trump’s decision to leave TPP “creates a vacuum that China is happy to try to fill,” Searight said.

Trump also is expected to attend the Asia-Pacific Economic Cooperation summit in Vietnam in November.

ASEAN members Vietnam, Malaysia, Thailand and Indonesia are among 16 nations the Trump administration is investigating over their U.S. trade surpluses. Pence said U.S. exporters to Indonesia should enjoy a level playing field and the relationship should be “win-win.”

And in an unusual move, ASEAN foreign ministers have arranged an 11-way meeting in Washington with Tillerson. The State Department said the meeting will take place May 4. It will reprise, at a lower level, a leaders’ summit Obama hosted in California last year./rga