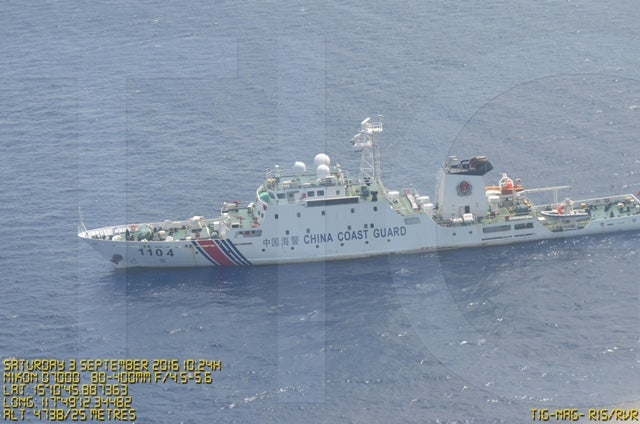 FILE – According to the Philippine Department of National Defense (DND), this is one of the Chinese vessels in Scarborough Shoal, one of the disputed areas of South China Sea. Photo from DND.

In a press conference at the House of Representatives on Thursday, Arroyo took the opportunity to promote the primer on the Philippines’ ocean space or maritime area by former solicitor general Estelito Mendoza.

Mendoza lauded Arroyo’s administration for the enactment of Republic Act 9522, which defined the archipelagic baselines of the country, passed in 2009.

Mendoza said without the definition of the archipelagic baselines, the country would not be able to implement the United Nations Convention on the Law of the Sea (Unclos), which recognizes the archipelagic principle.

The Unclos is the primary international law which governs maritime disputes on overlapping maritime zones.

However, Unclos does not govern territorial disputes, which are sovereignty or ownership issues over land territory.

“During the Arroyo administration, there was relative quiet and peace after enactment of RA 9522,” Mendoza said.

Mendoza said he remains baffled why the Aquino administration filed an arbitral claim before the United Nations Arbitral Tribunal, which actually provoked China to build artificial islands over the disputed waters.

“As it turns out, that is termed to be a very significant event to China, because China now has stated categorically and explicitly that its island building factor incidentally was provoked by the arbitral claim of the Philippines,” Mendoza said.

Arroyo took the opportunity at this point to note that China’s artificial islands were built during the term of Aquino, whose administration took as a centerpiece of its anti-corruption campaign the detention for plunder of Arroyo over an alleged P366-million intelligence charity funds mess. Arroyo was acquitted by the Supreme Court due to lack of evidence.

“Built in the previous administration,” Arroyo said of the artificial islands, rousing laughter from the audience.

Mendoza said the construction of the artificial islands by China while the arbitral ruling was pending then is “the most difficult problem” facing President Rodrigo Duterte now.

The Philippines won its maritime case against China when the United Nations Arbitral Tribunal in the Hague ruled that China’s historic nine-dash line claiming almost all the South China Sea has no historic and legal basis and that the West Philippine Sea falls within the Philippines’ exclusive economic zone. But by that time, China had already built artificial islands over the disputed waters.

This as opposed to Arroyo’s administration when, Mendoza claimed, “there was cooperative effort” among Philippines, China, and Vietnam, especially when the Joint Marine Seismic Undertaking (JMSU) was entered into by the Arroyo government.

Under the said agreement, Philippines, China and Vietnam through their respective national oil corporations would conduct joint explorations of the disputed South China Sea.
Arroyo said the JMSU as a “research survey… does not affect the respective position of the various countries on issues related to the area.”

Petitioners have asked the Supreme Court to declare as void the said deal because while the agreement covered a total of 142,886 square kilometers, more than one-sixth, or 24,000 sq. km, is not subject of any territorial and maritime dispute and thus belongs to the Republic of the Philippines, and because 80 percent of the site belongs to the country’s 200-mile exclusive economic zone.

The petitioners sought to void the deal between the Philippine National Oil Co., China National Offshore Oil Corp. and Vietnam Oil and Gas Corp. The deal expired in 2008. The Supreme Court has yet to issue its ruling on the petition.

Asked about her assessment of President Duterte’s seeming benign actions toward China despite overlapping maritime claims, Arroyo said she could not comment not knowing the facts available to the current administration.

“As far as China is concerned our strategic direction should be to emphasize our economic relations and transcend, to the extent that we can, matters and issues between us,” Arroyo said.

Mendoza, for his part, said it is his personal opinion that Duterte “is navigating the troubled waters of the China sea very well.”

Duterte faces an impeachment complaint before the House of Representatives over his alleged inaction in China’s incursions to the West Philippine Sea, Panatag Shoal, and Benham Rise.

Magdalo Rep. Gary Alejano, who filed the supplemental impeachment complaint to the first one involving alleged state-sponsored killings, chided Duterte for coddling up to China despite his campaign promise of going to the disputed waters by jetski and planting a Philippine flag there.

Duterte earlier said he could not do anything to stop China from building structures on Panatag Shoal, amid reports China is building an environmental monitoring station there.

Duterte even said he would plant a Philippine flag in the disputed Spratlys Island, but he later backed out due to renewed friendship with China.

Lawmakers earlier urged Duterte to be transparent about his deals with China, amid reports Duterte had an arrangement with China to allow its surveillance ships in Benham Rise, a 13-million hectare mineral-rich undersea region east of Luzon.

The United Nations in 2012 declared Benham Rise as part of the Philippine continental shelf.

Duterte urged to be transparent in dealing with China

Read Next
PH Navy hopes to learn from Russia warship visit
EDITORS' PICK
LTO’s P500-M deal for screws draws scrutiny
Smart reinforces superiority with best speed and mobile video experience in PH
Every Filipino home can now be a smart home with realme TechLife
Nestlé Philippines’ ‘NESCAFÉ Plan’ bags Grand Anvil at PRSP 56th Anvil Awards
New 3,045 COVID-19 cases push PH total active cases to 40,074
How to lose a PH genius: Wesley So officially a US citizen
MOST READ
Robredo on Sara Duterte leading poll surveys: Why are Filipinos drawn to leadership of this kind?
How to lose a Filipino genius: Wesley So officially a US citizen
Hugpong Ng Pagbabago fully supports Sara Duterte says confidant Davao del Norte governor
Duterte on his ‘faults’: ’I just have cases of extrajudicial killings’
Don't miss out on the latest news and information.