Duterte back with 139 undocumented Pinoys 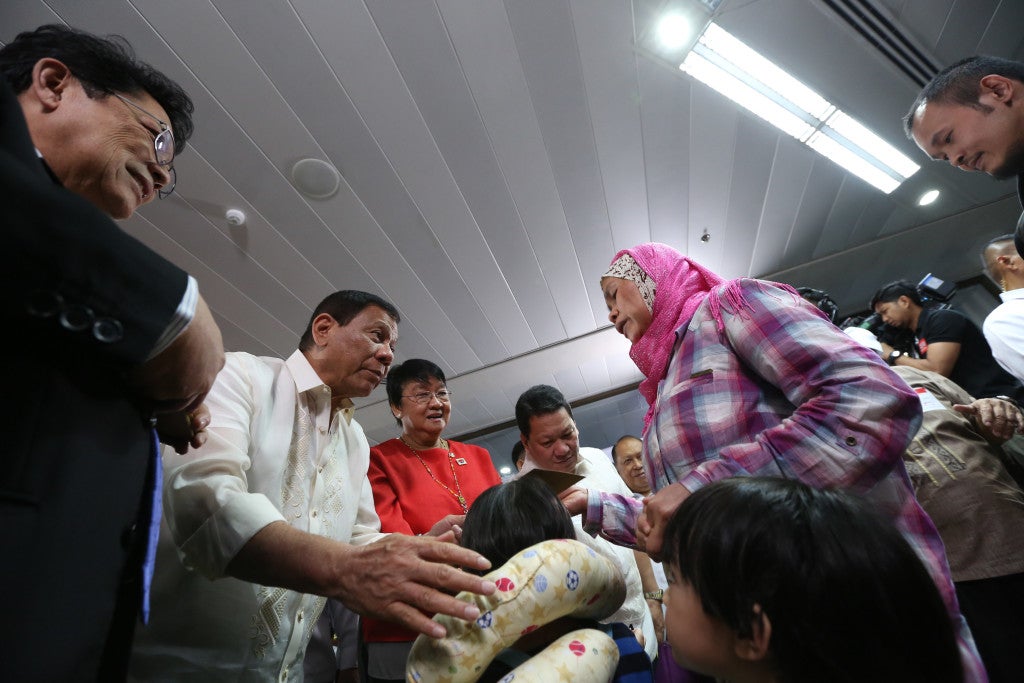 WORDS OF COMFORT President Duterte comforts one of 139 Filipinos working illegally in Saudi Arabia who have been granted amnesty and repatriated. MALACAÑANG PHOTO

President Duterte arrived in Manila early on Monday from a three-country visit to the Middle East, calling it his “most productive trip ever.”

But citing protocol, as well as the sensitivity of some security issues, Mr. Duterte said he could not divulge the specifics of his discussions with the governments of Saudi Arabia, Qatar and Bahrain.

The President’s main audience at Ninoy Aquino International Airport were the 139 undocumented Filipinos who were granted amnesty by the Saudi government.

“That … [was my] most productive trip ever … ,” Mr. Duterte said, cut off by applause from his audience.

“You are the real reason why we went there. I cannot disclose all that we have discussed. But I gave so many concessions because I said it [was] to the national interest of the Republic of the Philippines,” he said.

He added that Saudi Arabia, Bahrain and Qatar were “very much, more than willing really to help the Filipinos.”

The repatriated migrant workers comprised of 65 women and 20 children who came from Bahay Kalinga (women’s shelter) and 54 men who resided in Estiraha (men’s shelter), including 16 walk-ins at the Philippine Embassy in Saudi Arabia.

The 90-day Saudi Arabian amnesty program was launched on March 29. On the same day, Labor Secretary Silvestre Bello III deployed a team to gather the migrants who had accepted amnesty.

In a statement, the Overseas Workers Welfare Administration (Owwa) said that due to the goodwill generated by Mr. Duterte’s visit, King Salman bin Abdulaziz Al Saud chartered a plane to fly the migrants home to the Philippines for free and at no cost to the government in Manila.

The Department of Labor and Employment (Dole) and Owwa repatriation team assisted the migrants at the airport, with the agency also providing them services, including temporary shelter at the Owwa Halfway Home, psychosocial counseling and stress debriefing, and transport.

In his speech, Mr. Duterte said he was “thankful” that the Filipino workers were “home safely.”

He also expressed gratitude for their help to the Philippines, emphasizing that their remittances have always kept the economy afloat.

The President said the government would help the returning migrants learn new livelihoods by providing them with training and financial assistance.

“You can now be with your families and loved ones. We know your hard work and sacrifice. I have directed relevant government agencies to assist you as you turn a new chapter in your life. Thank you for your contribution to the economy,” he said.

Mr. Duterte said he was willing to give billions of pesos to assist migrants, but not having to give a billion pesos for the rehabilitation of drug addicts.

“I really feel bad about giving that one billion to drug addicts, those sons of bitches. But I have to help them because they are Filipinos, although they contribute nothing to the nation,” he said.

Mr. Duterte asked the distressed migrants how they were going back to their home provinces. Then he told them to line up and that he would buy them tickets “and you can board the plane.”

It was then that the P10,000 assistance for each migrant was announced. The migrants cheered.

Bello told reporters that Mr. Duterte considered his Middle East trip “very productive” because of the reactions of the leaders of Saudi Arabia, Qatar and Bahrain, who were “very demonstrative to our country.”

In Qatar, he said, Trade Secretary Ramon Lopez entered into agreements and business ventures that would “generate $250 million and 16,000 jobs.” —WITH A REPORT FROM TINA G. SANTOS