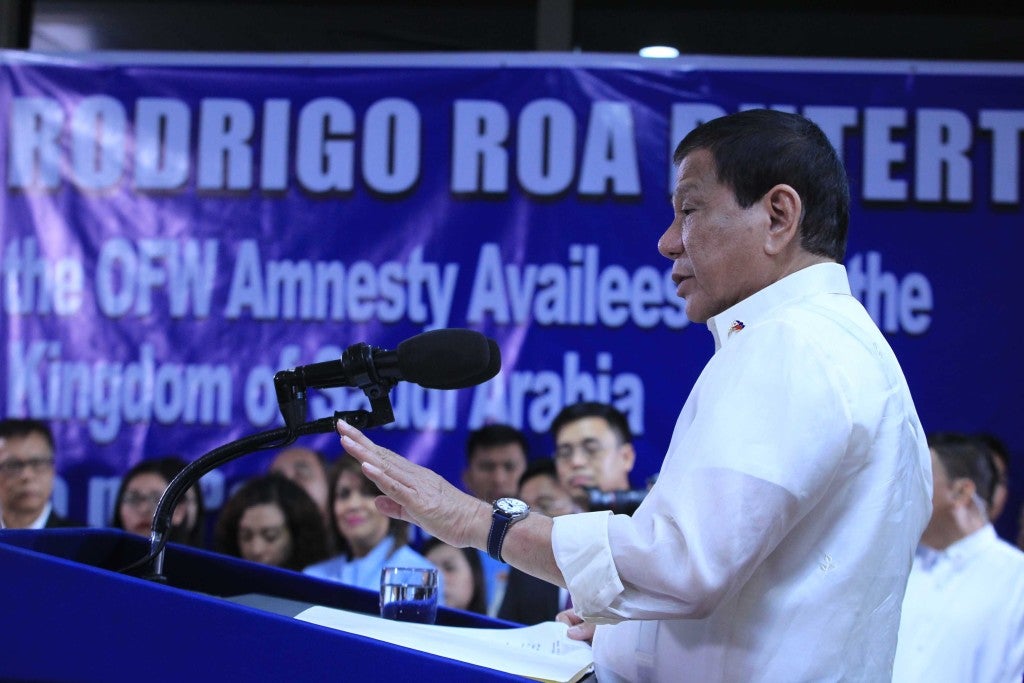 President Duterte on Monday called countries big on human rights “bigots,” unlike the Middle Eastern nations that made him feel very much welcome during his visit last week.

Mr. Duterte arrived early on Monday from a six-day trip to Saudi Arabia, Qatar and Bahrain.

“What really impressed me very much is that I could not sense any kind of discrimination, unlike those pretentious ones, those who are crazy, those who like human rights. As it turned out, they are bigots,” he said on his arrival at Ninoy Aquino International Airport.

Mr. Duterte did not mention any country by name, but he has always vented his ire on the United States and the European Union for criticizing his brutal war on drugs, which has claimed the lives of thousands of drug suspects since he launched the crackdown after taking office at the end of June last year.

One hundred thirty-nine distressed Filipino migrant workers arrived ahead of Mr. Duterte, and they had a different story to tell.

Happy to be home

Arlene Roa, a native of Negros Occidental, cried as she took her seat at the arrival area where she and her fellow repatriated workers were gathered to meet the President.

“I’m just happy that I’m able to come home,” she told the Inquirer.

The 38-year-old was a household worker in Saudi Arabia for five years. But her female employer became abusive after the woman’s husband died.

Roa said she was forced to abandon her work and was an illegal alien for nearly two years before she found shelter at Bahay Kalinga, the halfway house for distressed Filipino women in Riyadh managed by the Department of Labor and Employment (Dole).

She stayed there for two weeks and then accepted amnesty from the Saudi government through the program “A Nation Without Illegal Expatriates,” which allows undocumented migrants to return to their home countries within 90 days without risk of detention.

She said she would try to put up a business instead.

Twenty-six-year-old Eddie Beira Jr. of Batangas province said he was a service crew waiter for two years but his employer was unable to get him a worker’s permit.

He stayed at the Estiraha, Dole’s halfway house for men, for a month before taking the nine-hour plane ride home on Sunday.

Mr. Duterte had nothing but praises for the Middle Eastern countries he had visited.

“But what I have sensed especially is that there, they respect people. And there might have been some incidents but it could happen anywhere. Overall, all things being equal, there’s nothing I can say against the countries I have visited,” he said.

Saudi Arabia is “a bit more regimented, I would say, because it is really, they follow the, every direction of Islam,” he said.

“But the other states, especially Bahrain and Qatar, you can really move around and you can talk and you can sense that there is really a little of the freedom that the citizens enjoy which is shared by everybody,” he said.

Labor Secretary Silvestre Bello III told reporters that Kuwait and Saudi Arabia have always been a concern for household workers because these are where most of the abuses take place.