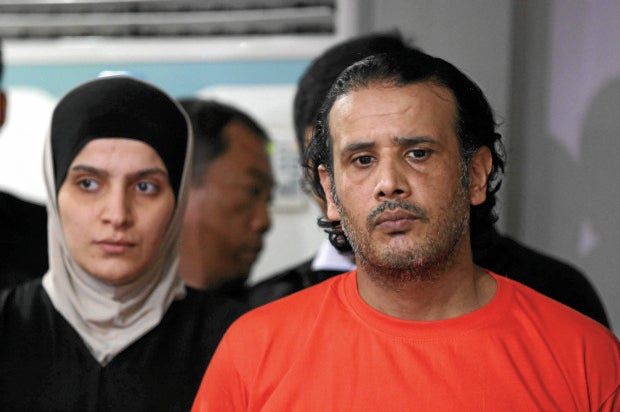 What initially was an alleged medical certification scam by Winston Q8, a company that facilitates the medical tests of Kuwait-bound overseas Filipino workers for a hefty price, was apparently led by people with links to the Islamic State terrorist group (ISIS).

Lawmakers from the House of Representatives held a press conference in Makati Shangri-La on Tuesday expressing alarm at reports that Hussein Azo Aldhafiri, a suspected ISIS member arrested in Bonifacio Global city, is an operations manager of the company Winston Q8.

According to its website, Winston Q8 is a Philippines-based company that is focused on “the facilitation of visa application process.” It also “aims to achieve a preeminent position in this visa processing channels while representing the Ministry of Health in Kuwait.”

In the press conference, Pangasinan Rep. Rose Marie Arenas, a member of the House overseas workers affairs committee, said the link of Winston Q8 to ISIS could open a “Pandora’s box” of fraudulent OFW schemes.

“This is an eye-opener to all agencies and departments in our country,” Arenas said.

Citing Bureau of Internal Revenue sources, Kabayan Rep. Harry Roque said the suspected ISIS member Aldhafiri, who was arrested with his wife Raja Zina, is a Winston Q8 operations manager and the brother of the company’s president Robandar Aldhafiri.

Arenas said the lower house had closed its probe on Winston Q8 and now leaves it up to the Department of Justice to dig deeper into the company’s ISIS links.

For his part, Angkla Rep. Jesulito Manalo said lower house should look into passing an anti-dummy law to prevent clinics from being used for illegal recruitment activities.

(The Departments of Justice and Foreign Affairs should be held accountable on why these wanted people were able to enter the country through a highly regulated industry.)

The lower house earlier investigated Winston Q8’s allegedly fraudulent scheme of charging OFWs at expensive rates to process their medical examinations for their visas to Kuwait.

According to a resolution filed by Albay Rep. Joey Salceda, Winston Q8 charges Kuwait-bound OFWs at P8,400 per worker for medical tests and facilitation of their visa applications, even though the prevailing price of the standard medical tests for overseas job applicants is only at P2,500.

According to a resolution filed by ACTS-OFW Rep. John Bertiz, Winston Q8 allegedly “conspired” with medical clinics to “monopolize” medical testing to increase the fees to P8,500-P9,600 even though the prevailing rate was only at P2,300.

Bertiz earlier expressed fear that the money from Filipinos bound for Kuwait is funding the ISIS through this scheme.

“Our OFWs cannot proceed to work in Kuwait if they will not pay Winston Q8 first even if the law states that OFWs are free to choose any medical clinic to their liking. It worries us that our OFWs have shelled out so much money to this Winston Q8 firm which has operations manager who has the same name of the arrested alleged ISIS member,” Bertiz said in a press conference last Friday.

“The Justice department has to find out if these people are one and the same. Also, where’s the OFW money paid to the Winston Q8? Is our OFW’s money being used for Winston Q8’s operation also being used for their terror activities? Is the money still here in the country? Is Winston Q8 operation sanctioned by Kuwait’s Ministry of Health?” Bertiz added. JE/rga