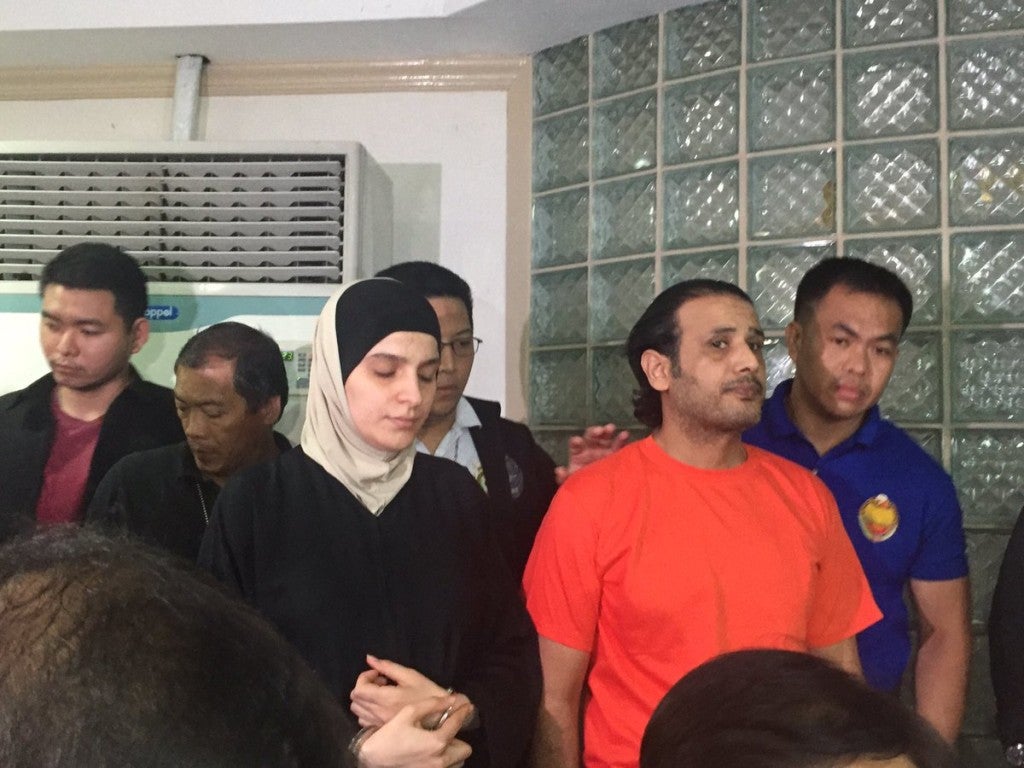 A military report obtained from a source said that the foreign couple — identified as Hussein Azo Aldgafiri alias Warsh Al-Kuwaiti, a Kuwaiti national; and Raja Zina, a Syrian — were arrested last March 25.

Ak-Dhafiri is allegedly involved in explosives manufacturing and possibly on operational planning against Kuwait.

Hussein is identified as an IS middle-level leader and a brother of a former IS leader (now deceased). Raja, whose father is a friend of Hussein’s brother, is four or five months pregnant.

The two reportedly failed to present any immigration document during verification.

The military leadership, meanwhile, refused to give an official statement.

“I am not at liberty to announce at this moment, all I can tell you is that there was an interagency operation which was geared towards the protection of our nation against any threat from foreign terrorist organization,” Armed Forces spokesperson Brig. Gen. Restituto Padilla said in a press briefing on Thursday.

He did not give details of the arrest, saying the Department of Justice is supposed to make the announcement.

Padilla also dismissed the threat on the presence of suspected foreign terrorists in the country.

“The presence of the threat is not what is critical, what is very important and critical to the Armed Forces is its ability to respond when a threat becomes active. Based on our assessment we are leaning forward and we are proactively engaged with all these threats. Once they become active, we can confidently say that we can protect you against these threats,” Padilla said.

Presented to the media

At the Department of Justice, the suspects were presented to the media by Justice Secretary Vitaliano Aguirre II Thursday afternoon.

“I congratulate our immigration officers for a job well done. The successful conduct of this apprehension speaks well of the competence and of the dedication of our immigration personnel,”  Aguirre said in a statement on Thursday.

He added that based on official communications forwarded to the BI by the United States Federal Bureau of Investigation (FBI), “Husayn Al-Dhafiri a.k.a. Warsh al-Kuwaiti a.k.a. Abu Muslim al-Kuwaiti, has links to terrorism and is believed to pose a threat to the national security of the Philippines.”

Rahaz, an expectant mother, was brought to the nearest hospital for immediate medical examination.

The suspects are now under the custody of the National Bureau of Investigation.

“As the guardians of our ports and all of our entry points, our immigration officers stand watch on our walls and tell us no harm will come to our people while they are on watch,” Aguirre said.

“I enjoin all of our immigration officers to continue serving dutifully and loyally regardless of their current circumstance because they are a valuable component of our government’s fight against criminality and in the global war against terror,” he added.

The justice chief said the two will be charged on the basis of immigration laws as they are not properly documented. Deportation procedures will then follow according to Aguirre. With a report from Ed Margareth Barahan INQUIRER.net