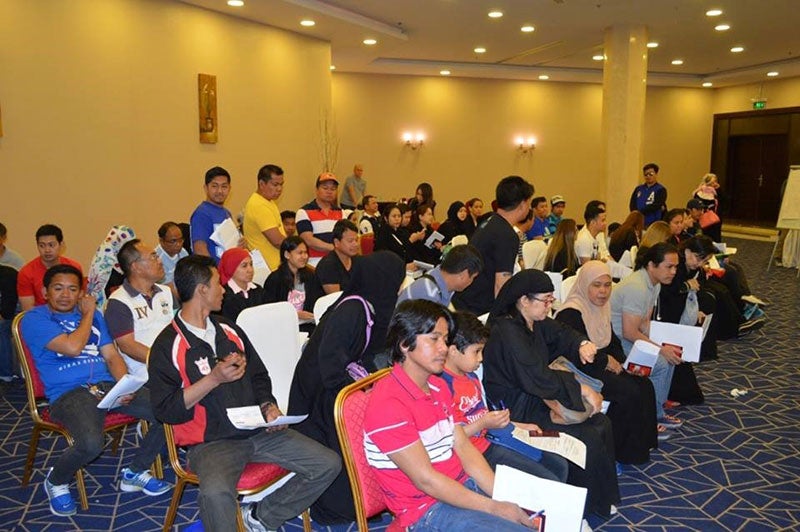 The Philippine Embassy in Riyadh is shown holding its 5th consular outreach mission or “Embassy on Wheels” (EOW) in 2017 at the Golden Tulip Hotel in Hail on March 24-25, 2017.  The Embassy was able to process 336 e-Passport applications, 13 extensions of passport validity, eight reports of birth, 19 notarial services and a travel document. The Team was also able to release 165 new e-Passports. (Photo from the official website of the Philippine Embassy in Riyadh at
http://www.riyadhpe.dfa.gov.ph/newsroom/announcements/112-consular-outreach-finished/3330-pr-039-2017 )

RIYADH, Saudi Arabia — Philippine Consul General Iric Arribas said reports that Embassy officials have been slow in helping stranded overseas Filipino workers or those who have run away from their abusive employers were inaccurate.

Reports from groups that have been monitoring the plight of OFWs said that some 700 OFWs have been languishing in Saudi jails due to various charges because of the lack of assistance from Philippine officials.

But Arribas denied that the Philippine Overseas Labor Office (Polo) has been trying to downplay the situation of OFWs under its care by not informing President Duterte about the real situation.

“There’s no such thing,” he said, adding that all forms of available assistance have been extended to OFWs in trouble.