Vote against Duterte in Time poll to prevent more killings 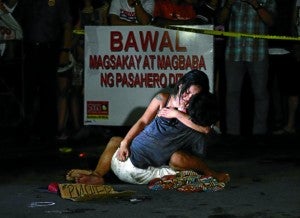 You have an opportunity to save a life in the Philippines. Just go online and vote against Rodrigo Duterte in the Time Magazine poll for the 100 Most Influential People.

Want to possibly prevent another poor Filipino from being slaughtered in a grisly campaign? Visit the Time site and click “No” on Duterte.

Anyone but Rodrigo Duterte.

Here’s why: A victory for Duterte in a poll by a prestigious international media organization would mean a tremendous PR boost for a leader who inspired a terrifying bloodbath in the Philippines, a killing spree that has claimed the lives of more than 6,000 Filipinos.

A Time victory would embolden Duterte’s supporters, from high-ranking government and military officials to the ruthless cops and vigilantes on the frontlines of this bloody campaign.

The bad news is he’s leading. Duterte is ahead with 5 percent of the votes.

You can already imagine Duterte and his supporters planning to use such a victory to defend the killings. Duterte doesn’t even have to say anything for his supporters to be inspired by the Time endorsement.

(You see, even Time magazine is praising the president. We’re doing the right thing killing these people!)’

Voting against Duterte will not put an end to the slaughter, of course. But a Duterte victory may give the thugs involved the slaughter renewed energy and drive to kill.

You have until April 16 to vote. The good news is Time editors will make the final choice. But Time also said: “We want readers to share their choices with us as well.”

The problem is this process can easily be manipulated. As Time noted: “Duterte has been known to use social media to promote his agenda and has reportedly paid people to push him to popularity online.”

There are so many other reasons not to give Duterte a PR boost. Just last week, he told members of the European Union who criticized his bloody campaign to “come here and we will talk because I want to slap you.”

Recently, Duterte also said: “They say, ‘Duterte kills the poor.’ … Of course it will be the poor people because the poor are ignorant and more likely to be hit.”

“You say they are only killing the poor people. Well, I am sorry.”

Duterte has been making such outrageous pronouncements since he took over last year.  And his words have ignited a carnage. They have inspired thugs and vigilantes to join a murderous campaign aimed squarely at poor Filipinos.

The Duterte slaughter was featured recently in a disturbing New York Times documentary “When a President Says, ‘I’ll Kill You.’

Then there’s this: The victims of the Duterte bloodbath have included children. Danica May Garcia shot to death in her family’s home in August last year. She was five years old.

In poor and besieged neighborhoods in the Philippines other children could suffer the fate of Danica May as the Duterte slaughter rages on.

Your vote in the Time poll may just save a few of them.