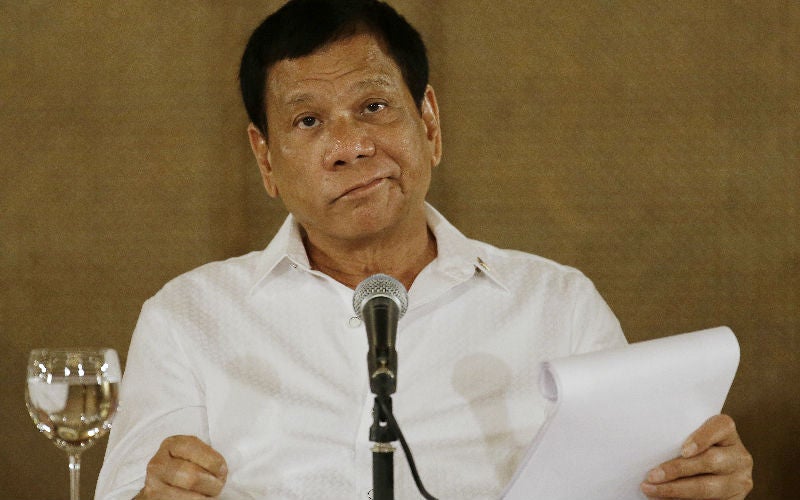 It’s President Rodrigo Duterte, not Vice President Leni Robredo, who is upsetting the international community for his inducement of extrajudicial killings, according to a United Nations affiliate organization to which Robredo sent a video message criticizing Mr. Duterte’s war on drugs.

Speaking for the first time about the firestorm sparked by Robredo’s message to the UN Commission on Narcotic Drugs annual meeting in Vienna on March 16, David Borden, executive director of the UN-accredited Drug Reform Coordination Network, said the Vice President deserved no blame for shining a spotlight on Mr. Duterte’s bloody war on drugs.

In an e-mail correspondence with the Inquirer, Borden said it was Duterte himself who had diverted global attention to the Philippine human rights situation as a result of his strongman policy and rhetoric against drug pushers and users.

“The President has repeatedly promised mass killings, urged police and civilians to engage in killings, and promised to protect the perpetrators of killings from prosecution,” said Borden, whose Washington-based group organized the forum on extrajudicial killings on the sidelines of the UN meeting in Vienna.

Mr. Duterte’s allies, including Speaker Pantaleon Alvarez, were outraged at Robredo’s criticism of the war on drugs. Alvarez threatened to impeach her for betraying the public trust.

Addressing Filipinos who criticized the Vice President for her video message, Borden said: “I would urge them to review President Duterte’s own words.”

“He’s (Duterte) compared himself with [Adolf] Hitler and said he would love to slaughter millions of people, not just the thousands who have been killed so far.  He’s threatened to kill journalists and human rights activists. He’s bragged about killing people himself,” Borden said.

“[In] the international community we look at statements like these from your President, and we see what they clearly seem to mean. That is the reason there’s international pressure on the Philippines over the killings, not because the Vice President recorded a video,” he said.

The Inquirer sought Borden and the other leaders of UN-affiliated groups who participated in the Vienna forum for comment on the political fallout that followed Robredo’s message.

“I did not hear anything in the Vice President’s speech that sounded like a betrayal of the public trust,” said Alison Smith, legal counsel and director for the International Criminal Justice Program of the UN-affiliated No Peace Without Justice.

“To the contrary, she appeared to be acting in the best interests of the public, and of the country as a whole, in appealing for a response to the drug problem based on human rights and the rule of law,” said Smith, who also took part in the Vienna meeting.

In an e-mail to the Inquirer, she said she found Robredo’s message to be “clear and convincing,” while the other participants seemed to find the Vice President’s remarks “inspiring and measured.”

Smith said two main points emerged from the forum: “One is that the way to treat a drug problem is through treatment and rehabilitation. Reducing demand can go a long way to address supply and can also help former drug users become productive members of society.”

“The other important point was a sense of fear that in a situation such as we face today with a global rise in populist and authoritarian or authoritarian-leaning leaders, those leaders might adopt a similarly violent approach to drug problems in their own countries,” she said.

Borden expressed alarm that Robredo’s message was being used by her political opponents to target her.

“It’s especially scary to see the Vice President’s video attacked as a ‘destabilization campaign,’” he said, adding: “That is a transparent attempt to stifle dissent.  Democracy demands dissent, as VP Robredo stated in her Time interview after the video’s release.”

He said Robredo’s strongly worded video message had caught his group by surprise.

“When I heard she was considering it, I wondered if it would be risky for her. But true leaders speak out at times like these,” Borden said.

All 21 on board scramble to safety after Texas plane crash