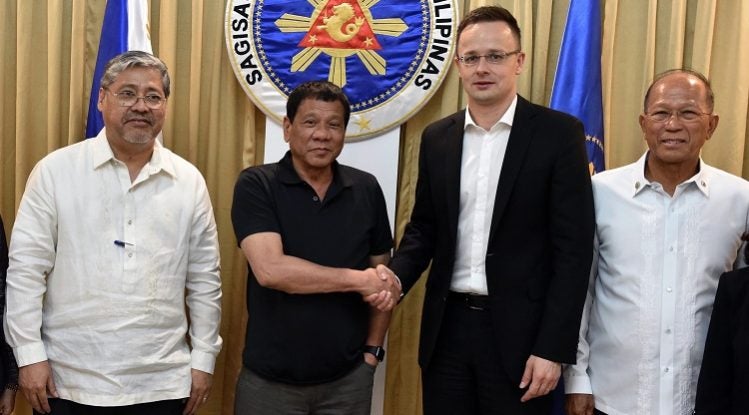 President Rodrigo Duterte (second from left) meets Hungary’s Minister for Foreign Affairs and Trade Peter Szijjarto in Davao City, on Mar. 27, 2017. With Mr. Duterte are (left) Philippine Acting Foreign Affairs Secretary Enrique Manalo and Defense Secretary Delfin Lorenzana. Szijjarto has just led a trade, economic, cultural and diplomatic mission to the Philippines and has announced the reopening of the Hungarian Embassy in Manila. (SCREENGRAB from the official website of Hungary Today at http://hungarytoday.hu/news/hungarian-foreign-minister-opens-new-embassy-philippines-meets-president-rodrigo-duterte-58734 and its Facebook page.)

DAVAO CITY – Representatives of Hungary on Monday met here with their Philippine counterparts and ink several trade and economic agreements, putting the bilateral relationship between the two countries to a “new dimension.”

Peter Szijjarto, Hungarian Minister for Foreign Affairs and Trade, said he was deeply honored for being the first foreign minister from a European Union-member state to visit Davao City, hometown of President Duterte.

“Hungary attaches a great significance to the cooperation with the Philippines as the major Christian nation in this region. We would like to put our bilateral relationship into a new dimension,” the Hungarian cabinet official told reporters following the signing of several pacts on trade and culture between him and his Philippine counterpart, acting Foreign Affairs Secretart Enrique Manalo, at the Waterfront Hotel here.

Szijjarto, who was to meet Mr. Duterte at the Presidential Guesthouse in Panacan village here late Monday afternoon, said the agreements were based on mutual interest and mutual respect, even as he pledged support for the Philippines in its bigger regional role as chair of the Association of Southeast Asian Nations (Asean) in 2017.

The Hungarian official said his country would also help push for a free trade agreement between the Philippines and the EU, which he hoped could be signed the soonest.

“We understand that only the Filipino people have the right to make a decision about who is leading the country. We respect the decision of your people and we only deal with the bilateral issues,” the Hungarian minister said.

He said Budapest “sees an openness and readiness on the side of the administration of the Philippines to enhance this bilateral cooperation based on mutual respect and mutual interest.”

On Tuesday, Szijjarto and his counterpart, Trade Secretary Ramon Lopez, are set to sign an agreement on the establishment of the Philippines-Hungary Joint Economic Commission (JEC) to further enhance the trade relations of the two countries.

He is also set to meet with at least six Filipino business leaders in Manila to discuss trade opportunities, even as he made a pitch for Hungary as an attractive investment haven in Europe, having the continent’s lowest corporate and income tax rates of 9 and 15 percent, respectively.

Having chaired 52 JECs with other states, Szijjarto said the Manila-Budapest segment “can be the best instrument to enhance the bilateral economic cooperation between the two states, if both parties take it seriously.”

He said heads from 15 Hungarian companies have arrived in the Philippines to look for investment opportunities in food industry, water management and agriculture technology and machinery.