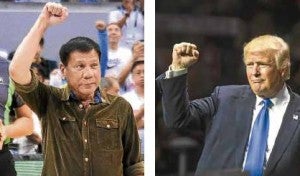 Stunned by the failure of his campaign to repeal Obamacare, President Donald Trump is said to be eyeing Filipinos who are key supporters of President Rodrigo Duterte for important posts on his team in Washington, DC.

The prestigious pro-Duterte organization, the Committee for the Advancement of Creative Imagination and Systematic Institutionalization of Rodrigo’s Aspirations — better known as CACI SIRA — said the Trump Administration has reached out to prominent members of Team Duterte hoping they could help him regain his momentum.

“Trump says he clearly has much to learn from what he called ‘Duterte’s impressive team,’” CACI SIRA said in a statement.

“Rodrigo is awesome and his people are terrific,” Trump told CACI SIRA. “I mean what more can you say. Just nine months in office and more than 7,000 people killed, and he’s still supported by the Filipino nation. I mean that’s power, baby. My congressional allies can’t even agree on how to get rid of Obamacare. Sad.”

Trump is a big fan of the eight-division world boxing champion who he hopes could be his point person in the U.S. Senate.

“How could they resist the Pacman, huh?” Trump told CACI SIRA. “Manny’s a winner and a fighter and he could definitely do more for my agenda than those losers in Congress. And he’s such a compelling speaker. I watched his speech arguing for a Philippine boxing commission, I mean, I didn’t understand a (bleep) word Manny said. But hell, I was convinced. Unbelievable.”

Duterte’s presidential spokesman has many fans on the Trump Team, including Trump spokesman Sean Spicer who marveled at Andanar’s ability to deal with media: “I don’t know how this guy does it, spout nonsense and not be flustered when reporters expose what he just said as nonsense.”

Trump agreed, adding, “Martin Andanar is a smart hombre, believe me. He’d be perfect as Spicey’s assistant or maybe even as Spicey’s replacement. I can just imagine how he’d react when finds himself in a jam with the White House press corps. ‘Ah, I misspoke. My first language is Visayan.’”

“This Aguirre guy is very loyal, and he says crazy things without blinking. I like that,” Trump told CACI SIRA.

“And I can help him with the hair, believe me.”

Trump said he’s sure he can get Uson a slot on Fox News, maybe even her own talk show like Sean Hannitty’s.

“Mocha’s suspension in radio is a disgrace, I tell you,” Trump said of Uson. “Mocha is an awesome person, a true friend of my buddy Rodrigo. And they went after her for that. Sad.”

Trump first heard of the comedian senator when he watched an episode of “Eat Bulaga” one evening when he got tired reality shows. “And they made this guy a senator? That’s (bleep) awesome. That’s even crazier than me becoming POTUS.”