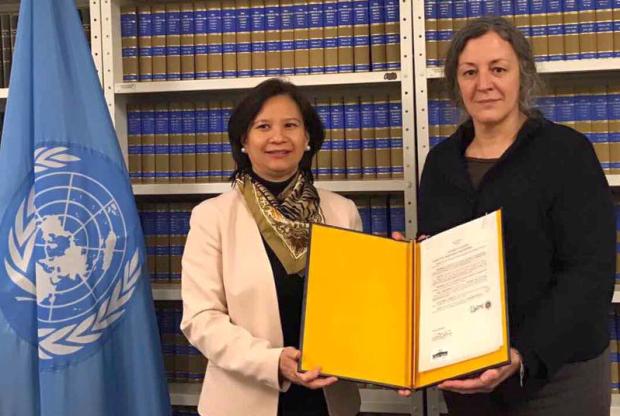 The Philippine Mission to the United Nations has deposited the country’s Instrument of Accession to the Paris Agreement on Climate Change, making the country the 138th state party to the accord.

Ambassador Irene Susan Natividad, chargé d’affaires of the Philippine Mission to the United Nations, handed over the document to  Arancha Hinojal of the UN Treaty Section at the UN headquarters in New York City on Thursday (Friday in the Philippines).

This Paris treaty will then enter into force in the Philippines 30 days after – on April 22, an appropriate date as the world celebrates Earth Day to show support for environmental protection.

“Earth Day will once again be historic for the Philippines as it will mark the commencement of the Paris Agreement’s legal force and effect in our country,” Sen. Loren Legarda said in a statement issued on Friday.

Legarda, who chairs the Senate Committee on Climate Change and is UN Champion for Resilience, added that enforcement of the treaty would also mark the country’s journey towards a resilient and sustainable future.

The agreement was signed in New York City on April 22, 2016, and was ratified by President Rodrigo Duterte last Feb. 28.

Legarda said an approach involving the whole society would be important in effectively enforcing the agreement and ensure that other nations would also keep their commitments.

“Our representatives in the climate talks can now actively participate in the negotiations, particularly the implementation of the Paris Agreement,” she said.

“We will exercise governance, oversight, leadership and decision-making and continue to be a strong actor in advancing our country’s interest,” she added. /atm