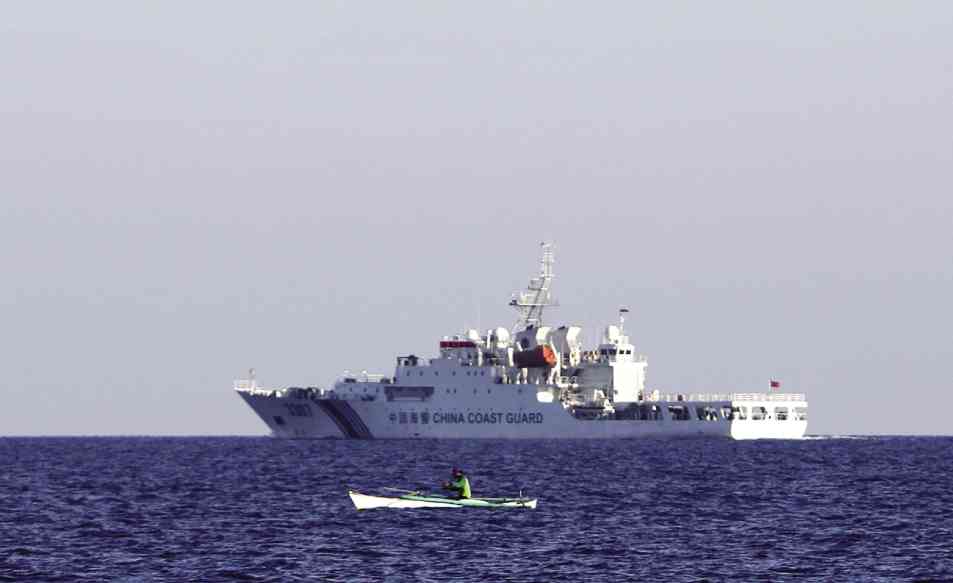 A Filipino fisherman steers his boat near a Chinese ship patrolling Panatag Shoal.

DAGUPAN CITY — China’s plan to build a permanent structure on Panatag (Scarborough) Shoal in the West Philippine Sea is bad news for fishermen in the coastal town of Infanta in Pangasinan province.

A permanent Chinese structure there would signify that China owned the shoal, which it seized from the Philippines in 2012, said Charlito Maniago, head of the fishing village of Cato in Infanta.

“What will happen to our fishermen? They will not be allowed to fish there again,” Maniago told the Inquirer by telephone on Saturday.

The government should assert ownership over the shoal, as the International Arbitral Tribunal in The Hague had ruled last year, said Jowe Legaspi, Cato village councilman.

According to the tribunal’ s decision, China has no historic title over the West Philippine Sea and that it has violated the sovereign rights of the Philippines.

“I hope China’s plan to build a permanent structure (on Panatag) will not push through. Why them? It’s ours,” Legaspi said.

Panatag, alo known as Scarborough Shoal and Bajo de Masinloc, is a triangular chain of reefs and rocks, about 240 kilometers southwest of Infanta.

Its 150-square-kilometer lagoon, as well as the waters surrounding it, are home to high-value fish species like tanigue (Spanish mackerel), lapu-lapu (grouper) and maya-maya (red snapper).

Since the start of the fishing season in early February, fishermen have brought home large bounties of fish from the shoal each day, Maniago said.

“You now see people in groups celebrating almost every night, especially in the fishermen’s houses at the beachfront,” he said.

He said at least 30 fishing boats from his village are now back to Panatag Shoal.

“We are happy that our village folk here now have a regular source of income. This is the first fishing season since 2012 that our fishermen have not been harassed on the shoal,” Legaspi said.

A fishing boat would normally stay on the shoal for a week before returning to shore to unload its catch.

But Legaspi said bigger boats do not leave the shoal, sending their catch instead to the shore through smaller boats every four days. The smaller boats would return immediately to bring supplies like food, water and fuel. —Gabriel Cardinoza