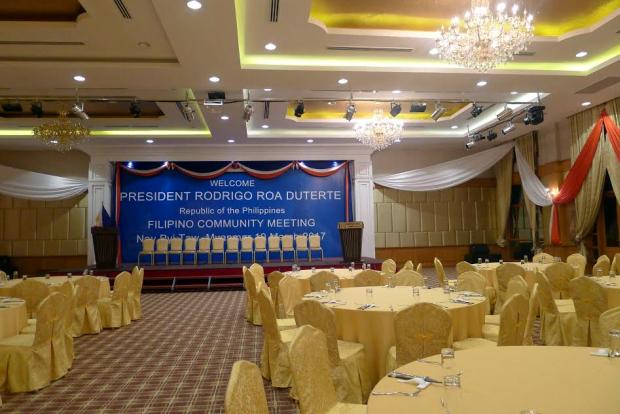 The grand ballroom at the Horizon Lake View Hotel in Nay Pyi Taw, Burma already spruced up for President Rodrigo Duterte’s meeting with the Filipino community on Sunday evening. The gathering will be the first of Duterte’s activities in his first state visit in Burma (Photo by JAYMEE T. GAMIL / Philippine Daily Inquirer)

NAY PYI TAW, Myanmar — The Filipino community in Myanmar may be small, but they’re willing to come out in the hundreds and be on the road for 10 hours just to meet President Rodrigo Duterte here in the country’s capital on Sunday evening.

Around 250 Filipinos are expected to bus in to Nay Pyi Taw, five hours away by road from the country’s international gateway and former capital Yangon, to attend a tête-à-tête with Duterte at the Horizon Lake View Hotel, which is part of the activities for his first state visit to this country from March 19 to 20.

As of 2015, the registered number of Filipinos in Myanmar reached 1,848, mostly temporary migrant workers, with only 66 permanent residents. As of January, however, seven months after the embassy launched a re-registration drive, only 753 Filipinos have been documented in the country.

Most Filipinos in Myanmar reside and work in Yangon. This means to meet Duterte in Nay Pyi Taw, the Filipino community would need to make the five-hour road trip going to the largely isolated capital and then make another five-hour trip to go back to their daily lives in Yangon.

“This is no joke, to travel in a car for 10 hours,” said Philippines Ambassador to Myanmar Alex Chua, in an interview in Yangon aired by the Presidential Broadcast Staff Radio-Television Malacañang. “So I can say that Filipinos here are really exicted to see the President.”

The 250 attendees registered for the event on the first day the Philippine Embassy announced the President’s visit, Chua added. He noted that more than 56 percent of Filipino voters in Myanmar had voted for Duterte as president.

Most of the Filipinos in Myanmar work as professionals – engineers, teachers, managers, lawyers, and humanitarian workers. Some Philippine companies also have a presence in Burma, mostly Yangon. The companies are set to make a courtesy call on Duterte in the country’s capital on Monday.

“Filipinos are well regarded in Myanmar,” Chua said. “They contribute to the development of the economies of both the Philippines and Myanmar.”

But it’s not just Filipinos looking forward to Duterte’s arrival. Even locals are on the lookout for his arrival.

Olivia Ramos de Guzman, president of Pilipinas.MM, a Filipino community group in Burma, said she even learned about Duterte’s visit from a taxi driver in Yangon.

De Guzman said the Filipino community would like hear about their countrymen back home during Duterte’s visit.

“Our main concern really is that of our family, making sure that our families are in a safer environment,” she said.

While thankful to Duterte for “the good things that he’s done” and for being “transparent,” De Guzman said the Filipino community in Myanmar hoped his talks with Myanmar officials would include the tax concerns of overseas Filipino workers.

“Hopefully in the future, there will be more infrastructure [in the Philippines so] that we don’t need to be away from our family,” De Guzman added. /atm