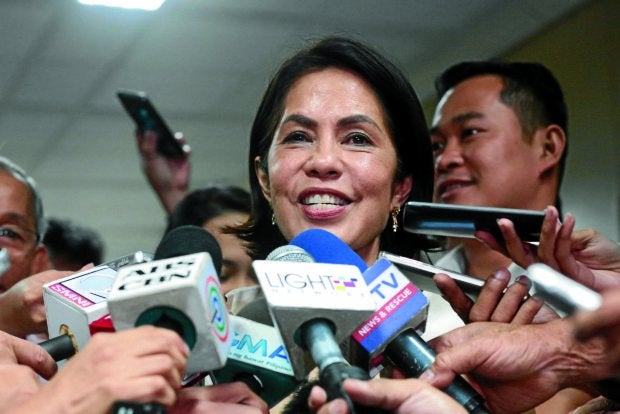 MANILA — The Philippines formally signing on to the Paris Agreement on climate change, as the Senate on Tuesday unanimously concurred with President Duterte’s ratification of the pact, spells a “great victory” both for the country and the planet.

This is according to Environment Secretary Gina Lopez who has expressed her “elation” at the development in a statement.

“This joint executive and legislative effort shows our unwavering commitment to protect the environment on a global scale,” said Lopez last Wednesday.

Lopez credited Duterte for “setting the stage” for the Senate’s concurrence to the global agreement to limit global temperature rise to 1.5 degrees Celsius, saying his ratification last Feb. 28 only showed he “deeply cares for the country.”

Lopez also tipped a hat to the chairperson of the Senate committee on environment, Sen. Loren Legarda, “for her decades-long crusade to popularize and elevate environmental issues.”

In a separate statement, the Philippine branch of nonprofit organization Climate Reality Project likewise lauded Legarda’s leadership in the Senate and the Philippine government for taking an “important step forward in the fight against climate change.”

“The Paris Agreement is incredibly important for island nations like the Philippines, as deadly typhoons become more frequent and dangerous sea level rise continues to threaten Filipino families and their abilities to live happy, healthy, and comfortable lives. The government must do all it can to protect this most basic right, and joining the Paris Agreement ensures that we have the entire world in our corner,” said Rodne Galicha, branch manager for The Climate Reality Project’s Philippines branch.  SFM

Read Next
Duterte to complete Asean swing with trips to Myanmar, Thailand
EDITORS' PICK
Quarantine violations still punishable despite deleted provisions in ‘Bayanihan 2’ – Bato dela Rosa
‘Puno na lahat:’ Metro workers brave lack of public transport, rains on Day 1 of GCQ
Leveling up your ‘lutong bahay’ with the kitchen companion you never knew you needed
Someone from the Philippines can become $356 Million richer this Tuesday
BFP raises general alarm over Mandaluyong fire
Cherry Mobile teams up with Cloud Panda PH, launches online store
MOST READ
‘If I had not been SolGen, I will make you eat your words,’ Calida tells Coco Martin
51 percent of German firms holding back investments in PH, but not because of COVID-19
5 car dealership outlets shutting down
BFP raises general alarm over Mandaluyong fire
Don't miss out on the latest news and information.