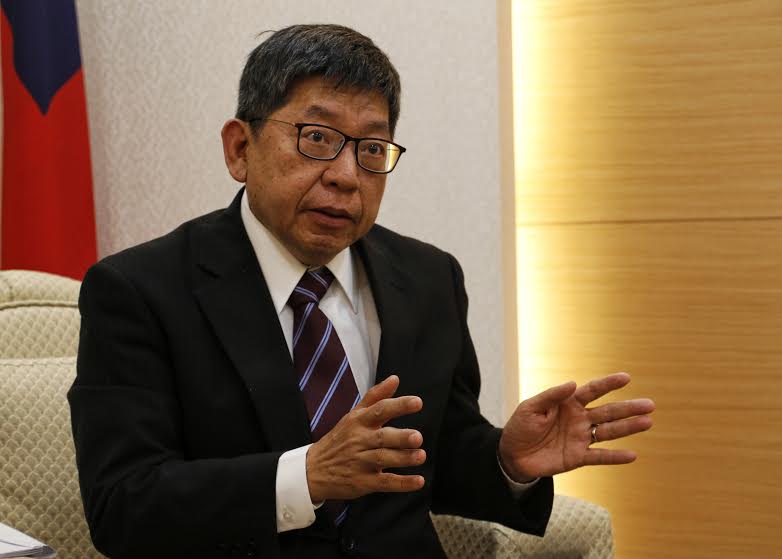 Lin Cheng-yi, first deputy minister for Taiwan’s Mainland China affairs, in a talk with Southeast and South Asian reporters in an interview on March 11, 2017. (PHOTO BY JHESSET O ENANO / INQUIRER)

TAIPEI—A ranking government official has expressed hope that Taiwan would be included in dialogues concerning maritime and international affairs, even if it is not set to take any position on the increasing militarization in the South China Sea.

Lin Cheng-yi, first deputy minister for Mainland China affairs, said the only time Taipei, Beijing and Manila might meet in the waters would be through their fishermen, who usually had close encounters in the contested waters.

“The freedom of navigation for fishermen is very important,” Cheng-yi told Southeast and South Asian reporters in an interview. “(But) we don’t take a position to have very strong law enforcement activities in all (contested) waters.”

The South China Sea, known in Manila as the West Philippine Sea, has been the subject of a long territorial dispute among several countries that lay claim to islands, reefs and banks, including China, Philippines, Taiwan, Malaysia, Vietnam and Brunei.

While Taipei has claimed ownership over some islands, particularly Itu Aba, Cheng-yi said it has so far been excluded in the international conversation, as Beijing pressed its “One China” principle.

“Beijing treats Taiwan as a small brother, or a junior partner,” the ranking official said. “But we are more than happy to have more than just bilateral talks… Taiwan should not be excluded in the (international) dialogue.”

He added, “We would like to see all countries concerned to follow the United Nations Convention on the Law of the Sea, and to respect the peaceful settlement on the issue.”

In July 2016, the Philippines won an arbitration case against China on the legality of the mammoth country’s “nine-dash line.”

More recently, however, maritime tensions flared up once more as Chinese ships were spotted sailing the waters of Benham Rise, which the United Nations has recognized as part of the Philippines.

Manila had aired its concern over the Sino ships, but Beijing had dismissed them, with its Foreign Ministry stating that it was simply carrying out “normal freedom of navigation.”  SFM