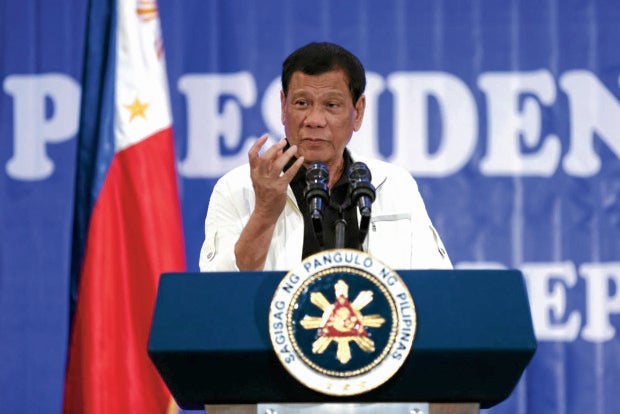 Palace: No case vs President Duterte because the [“extrajudicial killings] are not state-sanctioned.”

Malacañang on Saturday dismissed threats to charge President Duterte before the International Criminal Court (ICC) for his alleged responsibility in the thousands of deaths from his war on drugs, saying the government was not involved in extrajudicial killings.

“We don’t have extrajudicial [killings] … none. That’s not applicable to us,” presidential spokesperson Ernesto Abella said in an interview with state-run Radyo ng Bayan.

Abella said crimes brought before the ICC include the likes of genocide—“quite far” from what has been alleged against the President.

“We are not fighting against ethnic, racial or religious groups,” Abella said.

Abella was reacting to recent statements by confessed Davao Death Squad (DDS) hit man, retired SPO3 Arturo Lascañas, who said he was willing to testify in domestic and international courts on Mr. Duterte’s role in the killings.

Lascañas had admitted in a Senate hearing that he was one of Mr. Duterte’s executioners when the President served as Davao City mayor, corroborating an earlier testimony by Edgar Matobato, another confessed DDS member. The administration has branded their testimonies as lies.

“[The extrajudicial killings] are not state-sanctioned,” Abella said. “And what we’re dealing with here are crimes like drugs and dealers and drug addiction and drug dealing. Actually, these are just police operations.”

More than 8,000 suspected drug offenders have been killed since Mr. Duterte took office and launched his bloody anti-illegal drugs campaign in July. The government insists less than half of the killings could be attributed to police operations.

Abella said Lascañas’ testimony had been “discredited,” echoing the assessment of many senators that the former police officer’s testimony had “no probative value.”

Asked to comment on a statement by European Trade Commissioner Cecilia Malmström that the drug killings, the restoration of the death penalty and the lowering of the age of criminal responsibility could affect the country’s trade ties with the European Union, Abella said critics of the President must grasp the magnitude of the drug and other problems Mr. Duterte was trying to solve.

“First of all, perhaps we should understand that when the President came in, corruption, crime and illegal drugs [were] deeply entrenched in the Philippines,” Abella said, adding that even some in authority were involved.

He said the President must ensure that the Philippines is first safe and secure. After achieving that, economic growth will follow, he said.

Responding to allegations by the US-based Human Rights Watch that the President was encouraging war crimes, Abella said Mr. Duterte only wanted to protect the people’s welfare.

“We are fighting for the existence and for the life of the nation. Perhaps other people won’t understand that because they are in developed [nations] and have different circumstances,” he said.

“Any leader needs to be more authoritative. All the President wants is a peaceful nation,” Abella said in Filipino.