Who is the new acting DFA secretary? 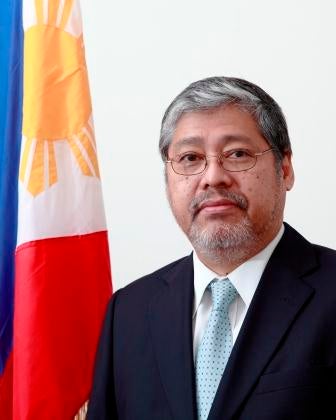 After Perfecto Yasay Jr. was rejected by the Commission on Appointments, President Rodrigo Duterte appointed Undersecretary Enrique Manalo as his temporary replacement.

“Undersecretary Manalo has been at the forefront in addressing several critical issues on foreign policy,” the Department of Foreign Affairs (DFA) said in a statement. “His career in the Philippine Foreign Service spans nearly four decades since he joined the Department in 1979.”

The new acting secretary came from a family of diplomats. His father, the late Armando Manalo, was a journalist and former ambassador to Belgium. His mother, Rosario Manalo, was the first female career diplomat of the DFA.

Before being appointed acting secretary, Manalo was DFA’s Undersecretary for Policy and represented the Philippines in various international conferences.

Below is a list of the other positions held by Manalo:

Manalo graduated from the University of the Philippines with a degree in economics. He finished his MA in Economics from the same university.

He is married to Pamela Louise Hunt and has two sons. KS/JE

Read Next
NDF consultants leave PH to help in efforts to resume peace talks
EDITORS' PICK
‘Justice will be done,’ Duterte assures as he vowed probe on Jolo incident to bare ‘truth’
Smart releases Hyun Bin’s second TVC
DOLE: Return of OFWs’ remains from Saudi to be ‘delayed,’ deadline moved to ‘early next week’
EuroMillions Superdraw: A lottery draw unlike any other is coming to the Philippines
Current dominant strain of COVID-19 more infectious than original—study
Water remains our saving grace right now
MOST READ
Locsin warns of ‘severest response’ if China’s army drills in SCS ‘spill over’ to PH domain
BREAKING: Duterte signs anti-terror bill into law
Duterte tells military: No other president looked at you the way I did
INQ animated bar graph: How severe is COVID-19 in Southeast Asia
Don't miss out on the latest news and information.