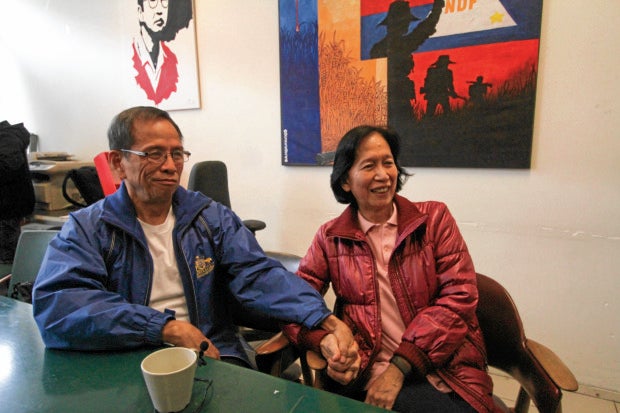 Benito and Wilma Tiamzon during the interview with Inquirer in Oslo. PHOTO BY KARLOS MANLUPIG

National Democratic Front consultants Benito and Wilma Tiamzon and Victor Ladlad have been allowed to leave the country to participate in the backchanneling efforts between the government and communists negotiators to resume the peace negotiations, Defense Secretary Delfin Lorenzana said on Thursday.

The Tiamzons are the alleged leaders of the Communist Party of the Philippines.

The three consultants left for a flight to Europe on Wednesday night and will be later joined by Presidential Peace Adviser Jesus Dureza, the defense secretary said in a forum at Camp Aguinaldo.

“A lot of people are urging us that before we will go back to the formal peace talks, mag-backchanneling muna so that we will already have concrete proposal from each side acceptable by both sides so that when we go to the formal talks, plantsado na,” Lorenzana said.

He said President Rodrigo Duterte has been considering going back to the negotiating table “because of the clamor of the Filipinos, a large portion of the Filipino people including the Congress, who signed a petition to resume the talks.”

Lorenza said the defense department and the military also welcome the backchanneling efforts between both sides.

“We also want to stop the fighting in the hinterlands in the rural areas so that we can bring developments,” he said.

Duterte scrapped the peace talks last month after the communists insisted on their demand to free their political prisoners, called off its unilateral ceasefire, and launched a series of attacks against state forces.

The defense chief said that some of the conditions of the President that could persuade him to resume the peace talks include a bilateral ceasefire, a stop to extortion activities by the communist rebels, and the release of the rebels’ hostages. JE

Read Next
Duterte not setting aside arbitral court ruling, says Lorenzana
EDITORS' PICK
DILG to stranded workers: ‘Stay where you are’ until Luzon-wide quarantine is over
BREAKING: 1,075 people in PH has coronavirus disease – DOH
Style and music journeys with Claudia Barretto
UP-PGH wards for COVID-19 patients finished in 5 days
IATF: Food firms to operate with 50% of workforce during Luzon quarantine
Cebu City closes its borders
MOST READ
Tootsy Angara bares neighbor wanted them out of village
Pacquiao to seek probe on leaked private letter from Barangay Dasmariñas
BREAKING: 1,075 people in PH have coronavirus disease – DOH
593 health volunteers sign up to fight COVID-19, says DOH
Don't miss out on the latest news and information.