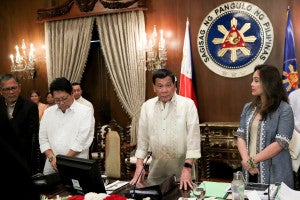 MANILA — The Institute for Climate and Sustainable Cities (ICSC), a local climate policy group, has lauded President Duterte’s signing of the Paris agreement on climate change for ratification of the Senate.

“We did not doubt President Duterte’s intention to act on climate change. By signing the Paris Agreement, his administration is asserting its leadership role in the [United Nations] climate negotiations,” said Renato Redentor Constantino, ICSC executive director, in a statement.

The ball is now in the Senate’s court to “shepherd the climate deal fast enough to give our country the platform it needs to lead Southeast Asia’s climate action agenda,” according to Constantino.

Constantino suggested that the Philippines, as chair of the Association of Southeast Asian Nations, push the region to partner with China and Japan on climate-related investments.  SFM