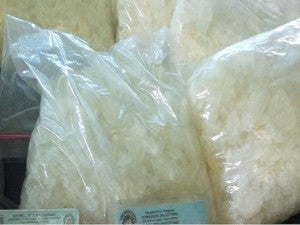 Archie Grande, PDEA-Calabarzon director, said the suspect, Zhi Quan Wu, was nabbed in an entrapment operation in a condo unit in Malate, Manila after he sold 1,000 grams of shabu worth P6 million to an undercover operative around 2 a.m.

“The operation was the result of our case build-up using our assets after we received information on the illegal drug activities of the suspect,” Grande said in a phone interview.

Grande tagged the suspect as a “high value target” in the government’s intensified campaign against illegal drugs. Citing background information, Grande said the Taiwanese national had been living in the country for almost 10 years.

“Allegedly, the suspect was a graduate of a military academy and was once a military captain,” said Grande.

On Feb. 25, PDEA agents also arrested Gladys Ortega, 43, after she sold one kilo of shabu worth P6 million to an undercover PDEA agent at a mall inside McKinley Parkway in Taguig City around 3:30 p.m.

Grande tagged the suspect as an alleged courier of illegal drugs to syndicates operating inside the New Bilibid Prison in Muntinlupa City.

Both suspects are facing charges for violation of Section 5 (Sale of Dangerous Drugs), Article II of RA 9165 otherwise known as the Comprehensive Dangerous Drugs Act of 2002.  SFM