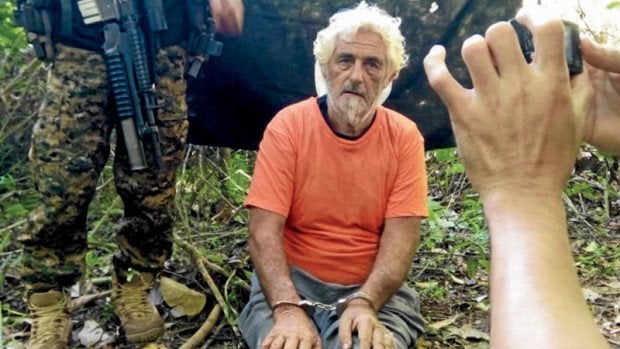 German hostage Jurgen Kantner, the latest victim of the Abu Sayyaf to be beheaded, is shown here in an Abu Sayyaf video. (SCREENGRAB)

ZAMBOANGA CITY – Gov. Mujiv Hataman of the Autonomous Region in Muslim Mindanao warned that the beheading of German captive Jürgen Kantner on Sunday would not be the last unless the Moro people unite against the Abu Sayyaf.

“This is not the first act of terror that the ASG has committed, and this will not be the last if we continue to turn a blind eye and deaf ear to the crimes of those who betray our faith and our people,” Hataman said in a statement.

He urged the Moro people to “stop pretending that this is happening in our communities without the knowledge of our people.”

Hataman said the Moro people should “work together to end this culture of fear and impunity in which the ASG thrives” because one day, they might wake up to find out that “the next murderous act could be the death of our families, our friends, or ourselves.”

“We call on our fellow Moros to speak out and provide our law enforcement agencies with the necessary information needed to stop these acts of terror,” he said.

Hataman also urged local officials in areas where the Abu Sayyaf operate to “assert their authority and to exert all efforts to clamp down on terrorist groups within their jurisdiction.”

“The regional government is committed to support the LGUs in whatever means necessary to stop these groups,” he said as he condemned the latest beheading as among the bandit group’s acts which went against the teachings of Islam.

“The Abu Sayaff Group (ASG)’s recent beheading is but one in a long series of brutal, terrorist attacks meant to strike fear in the hearts of our people. Time and again, we have condemned these acts that are against the teachings of Islam and against our values as Moros who have struggled for peace and justice in our land,” Hataman said.

He said that to counter the Abu Sayyaf, religious teachers must provide the people with “wisdom and guidance.”

The bandit group has been espousing jihad through distorted interpretations of Koranic verses, according to Hataman.

“May all of us look to the teachings of Allah and remember that our faith is rooted not on fear, but on compassion and empathy towards all,” Hataman added.

In Bongao, Tawi-Tawi, Moro youths are also urging the national and local governments to join hands in addressing the Abu Sayyaf menace.

“A true Muslim will never behead people, no matter what his or her religious belief is,” Nur-Aina Saban said.

For Al Nadzmi Taalal, a teacher in Bongao, the Abu Sayyaf’s real intention is just to raise money and nothing else.

“They are not real Muslims. I am ashamed of them,” Abdulhamid agreed.

“We hope that the increasing piratical raids in the Sulu Sea including  the abductions of sailors do not become a severe setback to the peace process, because it seems the peace process cannot address such security risks as piracy,” Bandila said.